'Mistakes Happen,' How Fake Quotes About Women Having Small Brains Got Publ

‘Mistakes Happen,’ How Fake Quotes About Women Having Small Brains Got Published 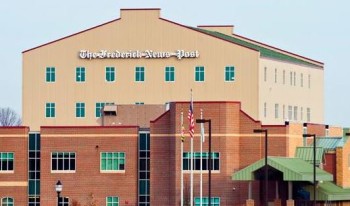 We’ve since heard back from The Frederick News-Post‘s managing editor Terry Headlee and editorial page editor Cliff Cumber with more information about the error.

Headlee and Cumber said that the author of the article, “paid freelancer” Patricia Weller, saw the fake quotes attributed to Murray online and published them, along with paraphrases and conclusions, as real without fact checking. She then included them in her column as evidence about how “these are not the best of times to be a woman.”

The newspaper found out that Weller’s column contained fake quotes and paraphrases based on the fake quotes, too late — after publication — when Murray’s wife, Catherine Bly Cox, sent in a letter to the editor detailing how the article erred.

iMediaEthics asked for more information about how Weller was duped by the fake quotes.

Cumber told iMediaEthics that Weller “took the quote from what she considered two credible sources, which she attributed in the original column.”

However, the credible source turned out to be, originally, a satire website, that was the source for the republication of the fake quotes by others.

He added that Weller apologized to the newspaper.

While those sources weren’t attributed in Weller’s column, the fake quotes are published on website Newslo, which identifies itself as “the first hybrid News/Satire platform on the web.”

They have also been republished on web forums on the websites tehparadox.com, cafemom.com, democratsforprogress.com and aarp.org. Those websites simply re-published an excerpt of the Newslo article.

Interestingly, one feature on Newslo.com allows readers to distinguish in articles between what is fact and what is satire. Careful readers will see that when you click the “show facts” button on the Newslo article quoting Murray, you see that much of the article is fabricated satire.

Cumber insists that being duped means someone had to trick you on purpose.  “I wouldn’t use the word ‘duped,’ which implies intentional deception with an agenda,” he wrote.

iMediaEthics challenged that definition, noting that duped means fooled, which Weller was when she included fabricated comments in her column.  A Google search for the definition of dupe shows

“Saying anyone was ‘fooled’ or ‘deceived’ is a mischaracterization,” Cumber opined, “because I don’t think anyone’s intention was to go out of their way to trick journalists or anyone else here, but it’s your story, so present it how you want.” iMediaEthics knows from the official dictionary definition that it doesn’t matter what the intention of the duped person was, if you believe something that is fake is real, you are fooled or deceived.

Cumber said that he can’t remember another incident of the News-Post publishing fake quotes in his “more than a decade” at the paper.

When asked for more information about what steps the paper will take to prevent such fabrications slipping through to publication again, Cumber wrote, “As with any corrections, we take them seriously and deal with them when they’re brought to our attention, and will continue to do that wherever we find them in the paper.”

How they fixed it

Interestingly, the News-Post had Weller re-write the column to remove the fake quotes, instead of having an editor fix the errors in the article.

Given that Weller, who was the person originally duped by the fake comments, wrote the new version of the article, we asked how the News-Post fact checked the re-write. We were simply told, “By checking with legitimate news sites that had reported on Murray.”

When asked about how the paper reviews submissions, Headlee wrote, “We review and edit all columns that are submitted to us and have rejected columns for various reasons too numerous to mention. It’s rare that any column is printed as submitted.”

Bly Cox, the wife of the man who was misquoted by the paper, said she was very satisfied with the newspaper’s actions in handling the error, Headlee wrote. He provided a May 21 e-mail she sent calling the newspaper’s response “really gratifying.”

Headlee told iMediaEthics by e-mail that the newspaper published an editor’s note in its print edition acknowledging error as well Bly Cox’s critical letter to the editor.

Cumber wrote that Weller will continue to write for the paper and that there won’t be any consequences for Weller. “Mistakes happen,” he wrote.

‘Mistakes Happen,’ How Fake Quotes About Women Having Small Brains Got Published