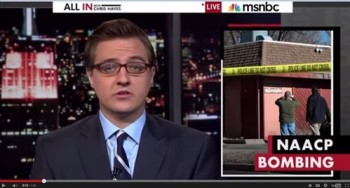 MSNBC’s Chris Hayes aired a photo from France in his coverage of the bombing of a Colorado Springs NAACP office.

“The only problem is the image is of a vandalized kebab shop in France — it seems the funny hat would be a dead giveaway,” conservative news site BizPac Review commented. Below see a still image of the show.

The false photo was aired Jan. 8. See below the clip of Hayes’ show featuring the error.

An explosion occurred on Jan. 6 near the Colorado Springs office for the NAACP. According to the Associated Press, “an improvised explosive device was detonated against the building” and the explosion was next door to the NAACP office, outside a barber shop.

No one was injured and the FBI is investigating, according to the Denver Post.

The photo in question is from France. Twitchy, a new site about Twitter, pointed out that the image is a Reuters photograph of a French kebab shop that was attacked.  It was re-published by the Daily Mail and carries the caption: “Shop targeted: The incident at the kebab shop was one of several suspected revenge attacks to have taken place in France following the massacre in Paris.”

We screwed up that image in the NAACP bombing report last night. It was from another story in our system. Our bad. We regret the error.

Twitchy noted that MSNBC apparently removed the video clip from its website, but it is still on YouTube.

iMediaEthics has written to MSNBC to ask if it aired a correction of the error.

UPDATE: 1/13/2015 2:40 PM EST A spokesperson for MSNBC told IMediaEthics that MSNBC aired a correction the night after the error. View it here.

“A correction,” Hayes said on air.

“Last night on this program in a montage of images from the aftermath of the apparent attempted bombing outside the building that houses the NAACP in Colorado Springs, All In inadvertently showed this image briefly from another story we’ve been covering. That image is of broken glass at a kebab shop in Paris which was vandalized after the terror attacks there this week. Showing that image was obviously a mistake. That’s our bad and we regret the error.