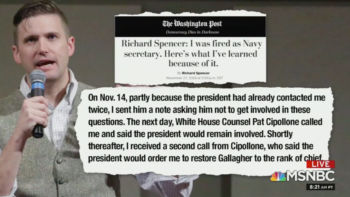 A screenshot of the MSNBC error via Mediaite

In an on-air correction, Yahoo News reported that Joy Reid said, “I want to make a quick correction. Oh, it’s a pretty big correction. Earlier in the segment as we were talking about former Navy Secretary Richard Spencer, we mistakenly showed the wrong image of white supremacist Richard Spencer. Very deeply sorry for that mistake.”

Mediaite has video of the apology. iMediaEthics has written to MSNBC.