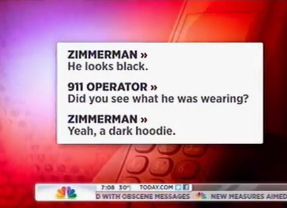 See above a screenshot from the edited transcript. (Credit: NBC News, via Mediaite)

An NBC News producer was fired April 5 as a result of the NBC News investigation into how an edited version of George Zimmerman’s 911 call made it on air, the New York Times reported.

Zimmerman is “a neighborhood watch volunteer who says he killed [Trayvon Martin] in self-defense” in February, as CNN noted.

The selectively edited conversation and transcript, as we have written, was aired on the March 27 NBC Today show and suggests Zimmerman offered Trayvon Martin’s race identifier to the police dispatcher, when Zimmerman was really responding to a question the dispatcher asked.

Zimmerman was quoted by NBC News as saying

“This guy looks like he’s up to no good. He looks black,”

When he really said:

Zimmerman: “This guy looks like he’s up to no good. Or he’s on drugs or something. It’s raining and he’s just walking around, looking about.”
911 Dispatcher: “OK, and this guy — is he white, black, or Hispanic?”
Zimmerman: “He looks black.”

The New York Times reported that the producer in question wasn’t named and that NBC News wouldn’t comment.  Reuters described the producer as “seasoned” and reported that for NBC News’ investigation, the network “interviewed more than half a dozen staffers.”

The Times’ report was based on two anonymous sources identified as “people with direct knowledge of the disciplinary action who declined to be identified discussing internal company matters.”  Reuters likewise based its report on “two sources at the network” but didn’t provide any more information about its sources.

According to the Times and Reuters, their anonymous sources called the tape editing a “mistake.”  According to Reuters, “The Today show’s editorial control policies…include a script editor, senior producer oversight, and in most cases legal and standards department reviews of material to be broadcast.”

The Daily Caller questioned why NBC News or anonymous sources so far aren’t releasing the name of the producer who was fired.

What do you think? If a media outlet determines an employee violated its ethics, how transparent should the outlet be? Should the person be named?

See all our stories on the media reporting on Trayvon Martin here.

We have written to NBC News for comment and will update with any response.