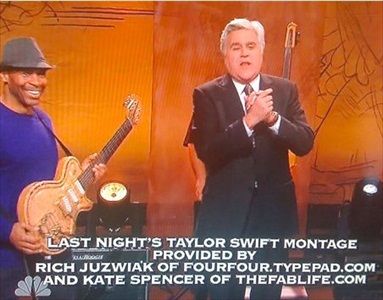 Jay Leno's "The Tonight Show" gave a credit to the two bloggers in a later show. (Credit: NBC via FourFour.Typepad)

The online world rallied around another case of a media outlet not giving credit to bloggers.

In this case, NBC’s Jay Leno was accused of taking credit for a video created and published online by bloggers Rich Juzwiak and Kate Spencer.  The Tonight Show later credited the two for their video montage of Taylor Swift looking surprised.

This latest online attribution incident comes just a week after Cooks Source was forced to shut down after its own blogger copyright/attribution theft.

Cooks Source, a small New England cooking magazine, shut down after lifting a copyrighted recipe off a blog without prior permission.  When the recipe writer and blogger, Monica Gaudio, contacted the magazine asking for an apology and a donation to be made, Cooks Source editor Judith Griggs suggested Gaudio should instead pay the magazine for editing her blog.

Both bloggers and major news outlets like NPR picked up Gaudio’s copyright infringement claim, which led to an online movement against Cooks Source.  After Cooks Source advertisers were contacted about the incident, many reportedly “pulled out” of the magazine, leading to the magazine’s closure.

Bloggers Rich Juzwiak and Kate Spencer created and published a video montage, or “supercut” of Taylor Swift’s surprised reactions on both Juzwiak’s blog and VH1’s The Fab Life Nov 16.blog.  Spencer is a senior editor at VH1.

Juzwiak detailed the story here on his Nov. 23 blog post and posted the video.  (Spencer also blogged about the issue here.)

Research coordinator Sean O’Rourke reportedly contacted Juzwiak asking if The Tonight Show could use his video during Leno’s interview with Swift.  But, Leno didn’t give credit on air, instead saying “We put together a little montage of you being surprised.”

(The New York Times confirmed with an NBC press representative that the video would be attributed to Juzwiak and Spencer.)

“Sean assured me I and/or my blog would get credit,” Juzwiak wrote.

As Juzwiak explains, “What follows are four clips that appeared in my supercut, clearly cut from HD sources (they’re 16×9 and look infinitely clearer than what I used) but put together in the same order that they are in my video (clips that originally appeared between the first and the second of the reel shown on The Tonight Show were removed, but the second through fourth appear in the exact succession with almost the same rhythm as my original video).”

Juzwiak wrote that he was “surprised” that “the video wasn’t credited as having originated on the Internet” since it has trafficked more than 200,000 views since its Nov. 16 posting.

“A little respect for the people providing your content would be nice! I understand that ownership is a dubious concept these days, and that I’m claiming ownership of a series of clips that I never owned in the first place, but an idea is an idea. They’re so hard to come by and so, so valuable,” Juzwiak argued.

O’Rourke reportedly contacted Juzwiak and explained the lack of attribution was because of communication problems.  O’Rourke also reportedly said that the Fab Life video “isn’t the first time a non-Jay Leno creation has been credited as such.”

But, this isn’t the first time Juzwiak has reportedly had to fight for attribution.  As the New York Times noted, a 2009 video Juzwiak made was picked up by NPR.  NPR ended up publishing a correction.

In that case, Juzwiak claimed NPR’s May story “In Horror Flicks, The Cell Phone Always Dies First,” used horror movie examples from his “No Signal” supercut.

He updated his story to report that NPR later gave him online credit and an editor’s note crediting Juzwiak.

iMediaEthics is writing to Juzwiak and will update with any response.