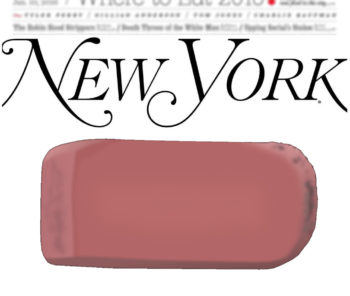 New York magazine deleted part of an interview after the interviewee — actor Noah Galvin — accused X-Men director Bryan Singer of having sex with “little boys.” Galvin, who is gay and plays a gay character on an ABC show Real O’Neals, also criticized Eric Stonestreet’s character portrayal in Modern Family and Colton Haynes’ coming out as gay.

The magazine added this editor’s note to its online interview:

“Editor’s note: This article originally contained a reference to Bryan Singer. In an interview format, we generally let the subject speak his mind. But this is a contentious issue, and after consideration, we decided to delete the reference. Noah Galvin has issued a statement.”

Galvin’s comments about Singer were

“Yeah. Bryan Singer likes to invite little boys over to his pool and diddle them in the f—ing dark of night. [Laughs.] I want nothing to do with that. I think there are enough boys in L.A. that are questionably homosexual who are willing to do things with the right person who can get them in the door. In New York there is a healthy gay community, and that doesn’t exist in L.A.”

“It was irresponsible and stupid of me to make those allegations against Bryan, and I deeply regret doing so,” Galvin said. “I have never been to Bryan’s house, and I admit there is no basis for any of the things I said or implied about Bryan in that interview. I understand now that my statements were not at all funny and have serious implications. I am very sorry and I hope that Bryan and everyone else who read that interview can forgive me for my serious lapse in judgment.”

Galvin added that he asked New York magazine and other outlets that picked up his comments about Singer to update with his apology.

iMediaEthics asked New York Magazine if Singer made any legal threats and if there was any precedent for removing a portion of a Q & A like this. New York Magazine’s Director of Public Relations Lauren Starke told iMediaEthics by e-mail “There’s an editor’s note on the post, but beyond that we don’t have any comment.”

In addition to apologizing to Singer, Galvin apologized for the whole interview, which he said “hurt the LGBTQ community and the industry.” He said:

“The entire interview I gave to Vulture has hurt the LGBTQ community and the industry I feel truly fortunate to be a part of. My only intention was to try and empower and promote honesty, but I fully understand that comments I made were brazen and hurtful. To Colton Haynes and to the LGBTQ youth, especially those who have embraced our show, I have no right to dictate how or when anybody comes out of the closet; I know how difficult and scary the process of coming out can be, and the last thing I would ever want to do is make it scarier. For anyone.

“Lastly, as I said in the interview, I think Eric Stonestreet is a wonderful actor. I apologize to everyone that I’ve hurt with my comments and understand the damage that has been done. I am new to this and will certainly commit to being more thoughtful and wiser as I navigate all of this moving forward. “

iMediaEthics has written to Singer’s attorney and representatives for Galvin’s ABC show.