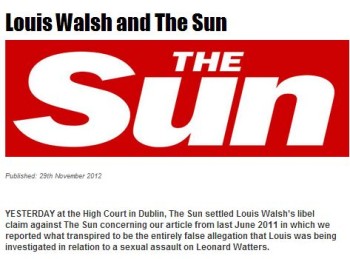 And yet another apology and financial settlement has been made by a news outlet over sex claims.  As iMediaEthics has written, the BBC and ITV have apologized and paid libel settlements in the past month to Lord McAlpine after wrongly suggesting he sexually abused a child.  While the BBC never named McAlpine, his name was linked online to the BBC’s report. ITV, on the other hand, put McAlpine’s name on a list of “alleged abusers” given to UK Prime Minister David Cameron and, ITV said, accidentally shown on the air.

Most recently, The Sun paid “X Factor judge and [boy band] Westlife manager” Louis Walsh €500,000 (about $650,000) and costs after reporting last year, “Louis probed over ‘sex attack’ on man in loo,'” the Guardian reported. The story was published in the Irish Sun and later the UK Sun.

On Nov. 29, The Sun posted a statement about the settlement, apologizing for the report and noting it was based on “what transpired to be the entirely false allegation that Louis was being investigated in relation to a sexual assault on Leonard Watters.”  As The Sun’s statement explained, Watters was later convicted for making “a false statement to the Irish police.”

Walsh said after the settlement that he was “very relieved” and the story was “all lies,” Digital Spy reported.  “I’m very satisfied with this total vindication for me, but I remain very angry at the treatment I received at the hands of The Sun,” he is quoted as saying.

Digital Spy noted that “the Irish Sun has denied defamation, claiming that it acted fairly – but it has accepted that the accusation of sexual assault was false.”

“This is a prime example of the serious damage that can be inflicted on an individual, whether they are well known or not, by the publication of totally unfounded allegations, which in the age of the internet can circumnavigate the globe in a matter of seconds.”

Tweed added that “hopefully” Lord Justice Brian Leveson’s report on press standards and practices, which hadn’t been published by the time of the settlement, would “address” the issue.

According to the Irish Times,  “it is alleged that” the Sun “paid €700 to Mr Watters and promised to make more payments to him before a journalist accompanied him to Pearse Street Garda station where he made his false complaint against Walsh.”

iMediaEthics has written to News International and Walsh’s attorney asking if the apology and settlement were on behalf of both the Irish and UK editions of The Sun, if both editions unpublished the story during the case or as part of the settlement, if The Sun had attempted to get comment from Walsh before publication, and for more information about the claim that The Sun paid Watters.  We’ll update with any response.