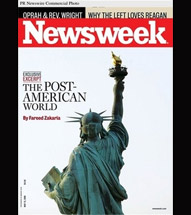 Newsweek is defending its decision to not include a disclosure in contributor Yuval Levin's byline. Levin is a former George W. Bush White House aide, now covering the Obama administration for the magazine.

Newsweek is defending its decision to not inform readers that one of its reporters, Yuval Levin, was a bioethics adviser with the George W. Bush Administration. Since President Barrack Obama took office, Levin has been writing for the magazine.

Blogger Daniel Tencer of The Raw reports on the issue in a November 17 post. He says that in a recent article, “Levin argued that the Democrats missed an opportunity to divide the Republican Party by not including tax cuts in the Obama administration’s fiscal stimulus package.” Yet, as Tencer and other bloggers are quick to point out, “Levin’s analysis overlooked the fact that the stimulus package included $280 billion in tax cuts, and still received no votes from Republican congresspeople.”

The oversight has brought criticism on the magazine, with readers wondering why they were not informed of Levin’s Bush White House ties. Tencer links to Ari Melber of The Nation, who says, “Newsweek‘s byline states that the writer, Yuval Levin, is “editor of National Affairs and a fellow at the Ethics and Public Policy Center.” It all sounds quite journalistic and non-partisan. But Levin is also a former aide to President George W. Bush. (He served on the White House domestic policy staff as recently as 2006). If anything, this government experience makes Levin’s political analysis more interesting. Why keep it from readers?” Melber says the magazine included a disclosure in an earlier article, and questioned the decision to leave it off the most recent article.

Newsweek  spokesperson Katherine Barna responded, “We believe our readers are aware of Mr. Levin’s background, and are able to discern a reported news article from argument, which Levin’s recent piece was.”

Should readers be happy to hear Newsweek thinks they are well informed, or annoyed that the magazine did not add a disclosure?

Melber links to other sites that have since weighed-in:

“The Washington Post Company does not understand disclosure” : Media Matters

“The Horror and The Outrage” : RCP Blog