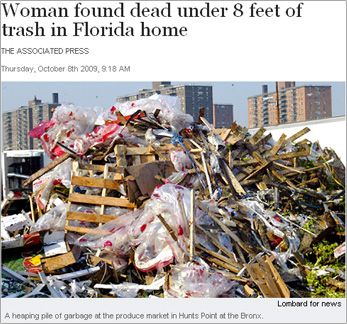 This New York Daily News photo misleads readers into thinking the trash at Hunts Point produce market in the Bronx is the 8-foot-tall pile of garbage found inside a deceased Florida woman's house.

What a pile of garbage.

“Woman found dead under 8 feet of trash in Florida home,” reads an October 8th, New York Daily News story.  Under the headline a towering mound of trash looms in an image readers would probably assume is the refuse mentioned in this tale of an elderly woman’s death.

But if you read closely, the caption of the photo reveals that the image is not of the Florida woman’s trash at all, but rather Bronx trash — “a heaping pile of garbage at the produce market in Hunts Point at the Bronx.”

It’s good that the News honestly described the photo, which features a monstrous pile of wooden pallets, plastic sheeting and vegetables discarded from the Bronx’s famous Hunts Point Market.  But why use this completely un-related image to accompany the story at all?

A reader missing the small caption could easily assume that the garbage in the photograph is what crushed this old woman in Florida – dragged out into the street by rescuers, perhaps… This misleading association was avoided in other publications, like this story on Jacksonville.com.

iMediaEthics has contacted the Daily News to ask why they chose to use this photo.  We will post their response as an update.