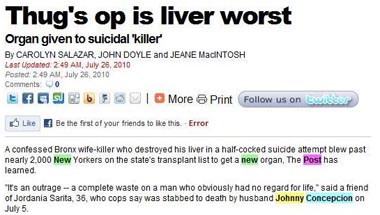 The New York Post published an article on July 26 that claimed Johnny Concepcion, a man accused of killing his wife, had a liver transplant at New York Presbyterian Hospital. The hospital says it's untrue. See the Post article in a screenshot from Google Cache.

An unusually large correction with a big font headline ran on page 2 in the print edition of the New York Post July 28 and online.

The New York Post published a false story, July 26, that claimed notorious Johnny Concepcion, accused of killing his wife over the Fourth of July weekend, got a liver transplant at a New York hospital.

The story was quickly picked up and re-reported by many mainstream media outlets including Forbes, MSNBC, CBS News, and Fox News. The news peg quickly featured the question –how did this accused killer move quickly to the top of the donor list when many law abiding citizens have waited and even died before receiving an organ? But, the hospital soon defused the controversy by stating  the transplant never took place.

The Post removed the story from its site and issued a correction of its own. The Village Voice found and posted a Google cache of the original New York Post story that has disappeared.

In the end, a whirlwind of corrections have resulted disavowing what started as the New York Post’s erroneous report.

Controversy was generated because Concepcion would have skipped to the top of the list for liver transplants in New York state, of which there are about 2,000 candidates, The New York Post reported.

Concepcion’s wife, Jordania Sarita, was stabbed fifteen times and died over the Fourth of July weekend, the Post reported.  The Post’s article featured quotes from both a friend and the mother of Sarita calling the transplant “a waste” and unfair.

It is important to note that The Post doesn’t attribute this information to anyone.  The original report was convincing in part because there is a picture of Concepcion in a wheelchair leaving New York-Presbyterian that was included with the original story and accompanies the Google cache. It remains unconfirmed why Concepcion was hospitalized. According to The Post who got the liver transplant part of the facts wrong, Concepcion had attempted suicide with rat poison, collapsed and was taken to the hospital.

The Post’s original story indictated that they tried to verify their facts before publication–but went ahead anyway before confirming the whole story. They reported: “A representative for New York Presbyterian/Columbia declined comment on Concepcion’s case, citing patient privacy.”

Although they admit error, The Post’s July 28 correction that ran prominently in the print edition, was not appended to the original online story as the story was removed. Even so, the correction itself is found online sans article.

Perhaps the galling part for police and hospital officials, is the Post’s correction seems to blame them for The Post’s error.

First they blame two anonymous police sources that they chose to use and failed to correctly verify their information. (The Post claims it “relied on two NYPD sources”…”and it is now evident they were misinformed.” (Note: the sources were “misinformed” not that they relied on bad sources).

The Post also tried to justify the error by saying they were refused information from the hospital making it their fault–not the editors’.

They write in the correction that “The Post sought official response from New York-Presbyterian. The Post was denied information by the hospital, which stated it could not discuss individual cases because it would be in breach of the Health Information Privacy Act (HIPA).” Then they added the jab: “Curiously, the hospital now sees itself free to publicly discuss Concepcion’s case.”

By this The Post suggests the hospital could have corrected their error before they published, but that the hospital had refused based upon HIPA’s privacy policy.

But, even that Post correction features an error, a Village Voice commenter noted.  It isn’t the Health Insurance Privacy Act which allows hospitals to keep patient information private legally.  In fact, it is the Health Insurance Portability and Accountability Act (HIPAA), according to Reuters Health.

The HIPAA privacy rule states that it “protects all ‘individually identifiable health information’ held or transmitted by a covered entity or its business associate, in any form or media, whether electronic, paper, or oral.”

The Society of Professional Journalists’ code of ethics advises that journalists “admit mistakes and correct them promptly.”