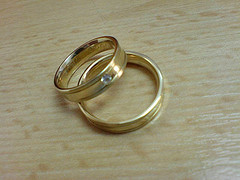 The Dec. 17 “Vows” story by Devan Sipher explained that recently married couple Carol Anne Riddell and John Partilla were both married when they met in 2006, and that they left their spouses for each other.

Both work in media – “Riddell was a reporter and anchor on WNBC television in New York” and Partilla was “a president of media sales at Time Warner” and the two have five children between them from their first marriages.  However, Riddell claimed the two “didn’t have an affair.  I didn’t want to sneak around and sleep with him on the side.”

The story itself has generated controversy as bloggers and commenters have criticized the Times for publishing the couple’s “dirty laundry.”  (Gawker called the article “salacious” and “scandalous” and a Newsday blogger labeled it “tacky.”  New York Magazine wondered why the two chose “to celebrate it in the face of your exes and children, right in the New York Times.”)

Forbes’ Jeff Bercovici reported Riddell explained they stood by the Vows article because they’re not “ashamed” of their story.

“We did this because we just wanted one honest account of how this happened for our sakes and for our kids’ sakes,” Riddell is quoted as saying. “We are really proud of our family and proud of the way we’ve handled this situation over the past year. There was nothing in the story we were ashamed of.”

But, Riddell stated that she didn’t expect the negative feedback over the story.

Bercovici wondered if the Times sought comment from either of the two’s ex-spouses.  Normally, journalists will note if they sought comment but never received one or never heard back from the person.  However, the Times story doesn’t address what happened with the couple’s exes.

Also noting that Riddell wouldn’t comment on if the exes were contacted, Bercovici reported that she explained that she and Partilla “did not ask the paper not to interview the exes or negotiate any other preconditions.”

A Times spokesperson wouldn’t comment about if the exes were contacted, Bercovici reported.

But The New York Times reportedly did issue a statement to NBC’s Today show regarding the unconventional story behind Riddell and Partilla’s wedding:

“The Vows feature gives a close-in account of a wedding every week. Every one is different. We don’t attempt to pass judgment on the suitability of the match, the narrative of the romance, the quality of the ceremony or the flavor of the cake.”

In a follow-up blog post, Bercovici reported that Riddell’s former husband, Bob Ennis, “objected” to the use of his daughter’s photo in the newspaper.

Ennis, a “media executive who has held high-level jobs,” reportedly wasn’t “contacted or interviewed or given any opportunity to opine on any of it, including having my seven-year-old daughter’s picture in the paper.”

One would assume that the Times had the consent of Riddell to have her children’s photos taken and published.  But, does the Times have an obligation to ask both parents for consent?

He claimed that the Times article allowed his ex-wife and Partilla to “whitewash” their story.  He further expressed criticism of the Times in general, but specifically for publishing what could be viewed as a publicity move and not seeking his approval of his daughter’s picture:

“The idea that they’d fact-check a style story — I don’t think that’s incumbent on them. But there’s a difference between that and publishing a choreographed, self-serving piece of revisionist history for two people who are both members of the media industry.”

Ennis, in a follow-up call, told Bercovici “Maybe The New York Times has forgotten, but New York can still be a dangerous town for children of wealthy people. I want to find out from the Times how that occurred and I will expect some sort of response and if I don’t get one I’ll take further measures to achieve one.”

A blogger, Meredith Carroll, wrote for parenting site Babble, outlined the possibility that the article was a publicity move here.

Partilla commented on the story — standing by the story, but also noted that the story “struck” a “nerve.”  Partilla stated, according to the Daily Mail:

“We were proud and happy to marry and legitimize our relationship and move forward. We can’t control other people’s judgments.”

“I think if we had had an indication afterwards of the nerve it would have struck, we obviously would not have shared our life in any way publicly.’

iMediaEthics will update with any comments from the Times Public Editor.

The AP cited one of HuffPost’s motives : “HuffPost co-founder and editor-in-chief Arianna Huffington says because divorce affects ‘so many lives and so many myriad aspects of these lives” she wants to “put a spotlight on them.’ ”

We sent the below questions to Devan Sipher, who wrote the Vows column:

Devan Sipher forwarded your query below.

The Vows feature gives a close-in account of a wedding every week. Every one is different. We don’t attempt to pass judgment on the suitability of the match, the narrative of the romance, the quality of the ceremony or the flavor of the wedding cake.

We don’t comment on the process of editing or reporting.