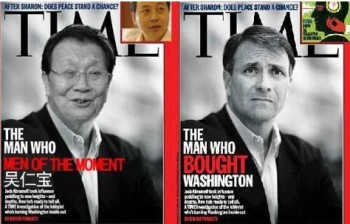 The Communist Party of China owns Xinhua, according to Mondo Times.

Xinhua’s March 18 story reported:  “Wu made the cover of Time magazine in 2005.”  However, “the cover was really a photoshop job of a January 2006 Time cover” of Jack Abramoff, according to the Morning Post.

The fake cover was titled “The Man Who Men of the Moment,” wheras the original read: “The Man Who Bought Washington.” Other text on the original cover — including Abramoff’s name — appears on the fake cover.  The photo is shown on Xinhua’s March 19 article. The Morning Post noted that “any copy editor with a beginner’s grasp of English would have picked up” that the cover image was phony.

But Xinhua wasn’t alone in publishing the fake picture.  According to The Morning Post, after Xinhua ran the photo, News News, Guangzhou Daily and China Daily were “amongst the many media outlets who ran the fake image.” Chinese website Danwei, which called the phony cover “blatantly fake,” included a photo of News News’ newspaper with the fake photo published.

iMediaEthics has written to Time seeking comment about the fake photo of its magazine and will update with any response.

Xinhua was busted for another poor Photoshop job a few years ago, as iMediaEthics wrote at the time.

In 2009, Xinhua published an image of Chinese president Hu Jinatao and his wife. But, Xinhua’s photo showed two extra feet in the photo because an interpreter had been pictured — but (mostly) Photoshopped out.

A few years ago, Xinhua ran a Photoshopped photo that doctored out a person. Xinhua’s version (bottom) forgot to delete the person’s feet.

Related, The Atlantic wrongly reported that Xinhua is the same news outlet that was hoaxed last year by The Onion’s satire story naming Kim Jong-un the “Sexiest Man Alive.”  But, as iMediaEthics wrote at the time, it was another Chinese Communist Party newspaper, People’s Daily, that was duped by the story.