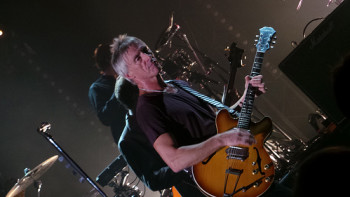 UK musician Paul Weller testified in court that he told the photographer to stop taking pictures of his children but the photojournalist ignored his request.

Now, The UK Mail Online must pay Weller’s three children after not pixellating their faces in 2012 photos it published as the UK court ruled that the photos invaded their privacy, the Press Gazette reported.

As iMediaEthics previously reported,  Weller sued over the images of the family in California, which the Mail has since unpublished. During court last month, Weller maintained he wanted his children to be out of the public eye and argued that his family hasn’t acted to the contrary, even though he has discussed his children in interviews and his wife has posted photos of the twin babies online. For example, Weller said his wife, Hannah, doesn’t show the children’s faces in her shared photos and that she doesn’t make money off the social media posts.

Hannah Weller said that “The image of their face should be controlled by their parents and not on a national website. It is part of my job as a mother to control who sees that information.”

The judge, Justice Dingemans, said that the Mail broke the privacy rights (article 8) without any public interest. Dingemans wrote, according to Press Gazette:

“Publishing photographs of the children’s faces, and the range of emotions that were displayed, and identifying them by surname, was an important engagement of their article 8 rights, even though such a publication would have been lawful in California. There was no relevant debate of public interest to which the publication of the photographs contributed.

“The balance of the general interest of having a vigorous and flourishing newspaper industry does not outweigh the interests of the children in this case.”

Dingemans added that he thinks the ruling is “consistent” with that of the UK Press Complaints Commission’s guidance regarding privacy and reporting on children because of their parents.

The Mail Online issued a statement published by Press Gazette defending its photos and noting that it planned to appeal the ruling.

“We offered to discuss how we could further reassure them to avoid litigation but their response was to issue proceedings against us on a no-win, no-fee,” the statement read, adding that the Wellers didn’t have any evidence that the photographer “followed, harassed or targeted” the family.

Further, the Mail questioned why the Weller children were ruled to have privacy especially given the teenager, Dylan, is modelling for magazine Teen Vogue and Hannah Weller is tweeting “images of the babies’ naked bottoms.”

Weller countered that the photographer “overstepped the line with the photos in LA, where they are full frontal pictures of the babies.”

“I don’t think the children should be brought into it, not until they are old enough to make their own decisions,” he added, according to the Guardian, which noted that Weller’s teenaged daughter, Dylan, was only in one photo shoot.

The Mail also complained that the ruling was unfair given that it is “now a global business competing with other US-based websites that operate under the freedom of the First Amendment,” and a majority of its readers aren’t based in the UK.

According to the UK Independent, Hannah Weller said of the ruling: “I’m pleased for our children. We didn’t want any money. We wanted to make sure they couldn’t harass and publish photos of our children again.”

The Guardian added that the Wellers issued a statement saying they are “absolutely delighted” with the court’s “detailed and very carefully reasoned judgment.”

The Wellers said that the photos would have been wrong regardless of where they were taken.

The ruling is published on the website of the British and Irish Legal Information Institute.

iMediaEthics is writing to the Mail and the Wellers’ representatives for further comment.