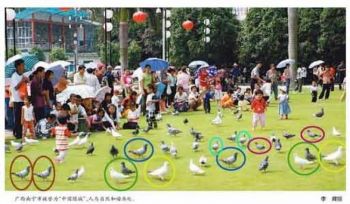 Bin used pairs of colored circles to indicate where birds in the original photograph were duplicated and then inserted elsewhere in the picture to supplement the look of nature in a park scene. The original caption explains: “Nanning in Guangxi Province is honored as China’s green city. People live in harmony with nature.”

Bin posts in his blog, blshe.com, that the doctored photo was published in a “special edition” of the People’s Daily newspaper that promotes “culture and development in different parts of China.” The copying and pasting of the extra birds–called “cloning” in Photoshop-speak–was crudely done. Look at matching colored circles. The two identical red circles, for example, indicate where one bird was copied and pasted into two-see image above.

The Epoch Times quotes blogger, Ye Zhenhua, comment on Bin’s blog, “Making up photos, used for propaganda purposes, is a precious experience we learned from the Soviet Union in the 1950s.”

The Epoch Times also mentions another case where pigeons were added. They report, “Last year, in the First China International Press Photo (CHIPP) Contest, the news gold prize award winner, ‘Pigeons on the Square,’ was judged to be fake.” Zhang Liang “admitted to the alteration” and was fired by his newspaper, which rescinded his prize after his photo fakery was “exposed through the media and over the Internet.”