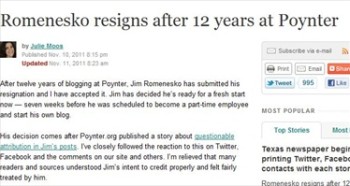 The Poynter Institute announced Nov. 10 that the originality of and attribution in aggregator/blogger Jim Romenesko’s posts has been called into question.

Poynter’s Julie Moos wrote that Poynter has failed to “meet the highest standards of journalism excellence” because “Romenesko’s posts exhibit a pattern of incomplete attribution.”  What he was doing, it appears, is copying and pasting other journalists’ work without using quotations but including attribution in the form of noting where the seemingly (but not always) paraphrased content came from.

As an example, Moos cited this Nov. 9 post by Romenesko as example.  The post lifts a good chunk of text from the Chicago Tribune, its listed source.

This is an issue because while Romenesko sets off two paragraphs in a different colored box indicating clearly that he is quoting from his source, one is led to believe that the rest of the content on the page is a re-write or summary by Romenesko.  Furthering that suggestion is the way the other graphs are written: Because — without quotations — Romenesko wrote that “the Tribune says Mayor Rahm Emanuel refused its requests …” one is led to believe that he is summarizing the Tribune’s report and not copying it. By attributing information but not including quotes, iMediaEthics believes that Romenesko is indicating a re-write or summary of information.

Moos both defended and accused Romenesko, noting that he does include source names and links for his posts, “too many of those posts also included the original author’s verbatim language without containing his or her words in quotation marks, as they should have.”

Moos argued that Romenesko wanted “to be transparent about the information’s origins….If only for quotation marks, it would be exactly right.”

The issue, as was clearly explained by Jamison Foser on Twitter (and re-tweeted by Moos, and later by us), is “the fact that some material’s in quotes suggests material that *isn’t* is original.”

Because of this, Poynter said it would start editing Romenesko’s posts pre-publication, according to Moos.  (Romenesko resigned within hours of Moos’ post.)  According to Moos, “a spot-checking of stories going back to 2005 finds multiple examples of the same practice.”  Moos wrote that as far as she knows, “no writer or publication has ever told us their words were being co-opted.”

Of course not! Romenesko’s blog is famously well-trafficked and a link there almost guarantees a story will make the rounds and get lots of reads.  Who bites the hand that feeds it?

Moos added that, “Jim has offered to resign and I refused to accept his resignation.”  Moos later accepted Romenesko’s second resignation request.

Media Bistro questioned why Moos didn’t label Romenesko’s practice “plagiarism.”  She told Media Bistro that because Romenesko included links and the names of sources, “he just missed a step by failing to signal the reader with quotation marks when verbatim text was being used.”

Further, Moos told Media Bistro that “I don’t characterize it as plagiarism, which usually involves an intent to deceive.”  The Washington Post’s Erik Wemple commented in his own blog post on the matter that perhaps it could be labeled “aggiarism,” since Romenesko’s blog was an aggregation site and “plagiarism” doesn’t quite fit the bill for what Moos described.

TampaBay.com’s Erik Deggans, however, defended Poynter and Moos, while noting his “conflicts here are many.” (Poynter “technically owns the newspaper which employs me,” plus he is friends with Moos.)  Deggans wrote:

“The unfortunate truth is, technically, she’s right. And worse, I suspect some bloggers are jumping on her because they do the same things too.”

In a story earlier this year, Romenesko addressed his plans to “semi-retire,” and is quoted by the NY Times as saying moving forward he won’t “be doing three- sentence summaries of other people’s work. That’s behind me.” According to the Washington Post’s Wemple, Romenesko reiterated his plans to stop aggregating in his career post-Poynter, which will involve writing on his own website.

iMediaethics also questions the New York Times’ report on the Romenesko attribution issue as the Times suggests that perhaps Poynter is just being too nitpicky with the headline: “Journalism Ethics taken too Seriously? Romenesko Scolded on his Own Blog.”

The Times describes Romenesko’s lack of quotation marks around others’ content a “technical infraction.”   Failing to put quotation marks around sentences NOT written by the person with the byline is a technical infraction? Since when?  Besides, given Romenesko’s numerous posts about plagiarism and proper attribution issues, shouldn’t he be familiar with what is and isn’t OK?

For example, in this May 2010 post on plagiarism nonetheless, Romenesko wrote:

The post clearly notes it concerns content on NPR (although, we note there is no link to NPR), but suggests that the first sentence is a summary written by Romenesko.  However, an NPR post by Shepard includes the sentences:

“The NPR piece wasn’t direct plagiarism as much as it was a case of NPR failing to give enough credit to Juzwiak.”

“I still think it’s fuzzy plagiarism,” said Juzwiak.  “It seems there should be a new word for it.”

Would it have been that difficult to put quote marks around that sentence? Or to put a colon after “Ombudsman Alicia Shepard says” so readers know that what follows is a direct quote?

We are writing to Poynter’s Moos to ask if Poynter will be putting updates or notices on the posts of Romenesko it found to be questionable, and if so, when and what type of notice.  We are also asking if Poynter will be conducting a “thorough review” of content for this issue and if so, when it will start and what it will include.  We also are asking Moos if she disclosed to Columbia Journalism Review’s Erika Fry that she would be going public with this issue pre-empting Fry’s interview with Poynter and story on the issue. We will update with any response.

The Romenesko attribution issue aside, also of concern to iMediaEthics is the way Poynter announced this incident:  Moos suggested that she was tipped off by Columbia Journalism Review’s Erika Fry with her comment that “Thanks to the sharp eye of Erika Fry, an assistant editor at the Columbia Journalism Review, I now know that Jim Romenesko’s posts exhibit a pattern of incomplete attribution.”  However, iMediaEthics questions both this suggestion and the public relations tactic of getting ahead of Fry’s scoop with Moos’ own post.   “Getting in front of the story” is a typical PR defensive when a negative story is about to break.

As CJR reported, “Moos’s post came before a scheduled interview with Erika, who plans to write more on this in the very near future.”  As an organization focused on journalism ethics and standards, StinkyJournalism is concerned with the way Poynter seemingly threw Fry’s scoop under the bus. Certainly Poynter’s attempts to be transparent and actively responsive to this situation are good; unfortunately, the way this was handled suggests Poynter trying to control the story.

The Awl also commented on the way Moos addressed this issue writing:

“Moos is also too coy. She learned of all of this ‘thanks to the sharp eye of Erika Fry, an assistant editor at the Columbia Journalism Review. ‘  What [Moos] meant was that Fry is working on a story about Romenesko and attribution so Moos went to publish first. I found that attribution a little incomplete.”

iMediaEthics has written to Fry for comment on this and will update with any response.

iMediaEthics has previously criticized Poynter for its lack of disclosure about its financial relationship with ESPN.  Poynter announced in February that some of its faculty would basically become ombudsmen for ESPN, but didn’t mention if it would be paid for the work.  In response to questions from iMediaEthics , Poynter’s president Karen Dunlap told us in February that ESPN was paying Poynter.  In a report for the New York Times the same day, Poynter announced it would be paid by ESPN. Dunlap told iMediaEthics that the first Poynter Review Project column on ESPN would be “a good place for them to disclose that Poynter will be paid,” but Poynter’s first column for ESPN, in March, didn’t mention any financial arrangement. Poynter still hasn’t disclosed how much it is being paid as far as iMediaEthics has seen.