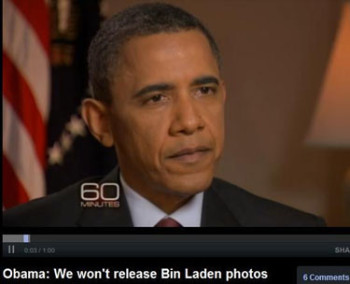 President Obama announced on CBS' "60 Minutes" that he wouldn't be releasing photos of Osama bin Laden's corpse. Polls before and after that announcement suggest the president's opinion led to a total reversal in public opinion. (Credit: CBS)

If we are to believe what three of our major media pollsters tell us, President Obama has a truly amazing gift of persuasion. He may not be faster than a speeding bullet, nor more powerful than a locomotive, but his words carry an immediate punch that would make Superman tremble.

OK…I exaggerate…Superman would never tremble. But Obama’s opponents might.

Here are the facts:

On May 1, President Obama announced that Osama bin Laden had been killed by U.S. forces. The next day, CNN conducted a one-night poll, asking Americans if the U.S. government should “release a picture of the body of Osama bin Laden?”

The results: A clear majority, 56%, said the government should.

On May 4, the president ignored the apparent will of the public and announced that he would not release any photos of the dead body, because they could incite violence against Americans and would probably not convince the skeptics anyway.

The new results: Both polls found an even larger majority, 64%, saying the Obama administration should not release the photo.

In the space of just three days, the public had, apparently, completely reversed itself. Fully one-quarter of the adult population, more than 50 million Americans, jumped ship, changing a 17-point margin in favor of releasing the photo, to a 35-point margin against – an astonishing 52-point swing!

Hard to believe? Is it really possible that so many people are willing to change their minds just because the president expresses an opposing point of view?

Actually, the hard thing to believe is that many people even had an opinion about releasing the photos the day after the military operation. But pollsters are loathe to admit that people may not have an opinion on any given issue at any given time. It’s apparently just un-American!

So, CNN was quick on the draw, the first major media organization out with a post-bin Laden poll, but the poll was shooting blanks. It measured fluff – not opinion.

One might argue that a few days later, by the time of the AP/GfK and NBC/WSJ polls, the public had a better idea of what the issue was all about. Still, both polls, like the CNN poll, did not offer respondents an explicit option to admit they might not have an opinion. I suspect that even after the president’s decision, many more people than reported by those two polls really didn’t have a fixed opinion on the matter, but were pressured to express one by the forced-choice question.

I could be wrong about this, of course. But as long as the pollsters refuse to explicitly measure non-opinion, we cannot know for sure what the public is really thinking.

One might suspect that question wording could have exerted some influence on the apparent change, but it does not seem likely.

CNN asked if the “U.S. government should or should not publicly release a picture of the body of Osama bin Laden?”

The NBC/WSJ poll asked if “the Obama administration should release, or should not release, the picture that shows Osama bin Laden dead with a bullet in his face?”

The AP/GfK polls asked if “the United States should or should not release a photo or video of Osama bin Laden’s dead body?”

While the NBC/WSJ wording presents a more graphic description of the photo than the other wordings, which might make some people more squeamish (and thus more likely to oppose release of the picture), that doesn’t appear to have happened. The results of that poll are essentially the same as those of the AP/GfK poll, which included a more restrained description.

It seems pretty clear that despite the illusion of a 52-point swing, a genuine tidal shift in public opinion did not occur in early May.

Instead, it’s most likely that right after bin Laden’s death, the vast majority of people really hadn’t formed an opinion on whether to release a picture of the dead body. When pressured to come up with an opinion, and in the absence of any argument to the contrary, CNN’s respondents simply picked what seemed most logical – release the picture.

Of course, after several days of media coverage, with the president articulating a national security argument against release, opinion could have crystallized, most Americans now responding favorably to Obama’s view.

This comparison of the three major media polls suggests how simplistic it is when pollsters and pundits argue that political leaders should either follow, or at least pay serious attention to, “public opinion” as revealed by polls.

The problem is that most of the time, most of the pollsters refuse to differentiate between public opinion and public whims. Instead of measuring real opinion, pollsters often create its illusion. And that is unfortunate, for it means that much of the time, the media polls can’t be trusted.