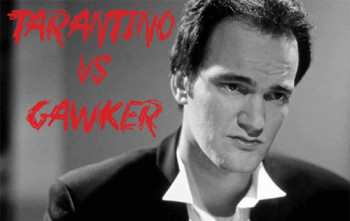 Gawker’s blog had published a link to the leaked script for the Hateful Eight, a script Tarantino had said he wouldn’t make into a movie after it had been leaked. Tarantino accused Gawker of contributory copyright infringement.

But, the judge gave Tarantino until May 1 to re-file the lawsuit, which is what he has now done.

The new lawsuit claims that Gawker violated the copyright by downloading the leaked script. The lawsuit states, in part, according to the Hollywood Reporter:

The Los Angeles Times noted that the new version of the lawsuit “also maintains its previous accusation that Gawker committed contributory copyright infringement.”

Tarantino has asked for “more than $1 million,” according to the Los Angeles Times. Variety reported, “In the revised suit, Tarantino is seeking actual damages and profits of more than $1 million, statutory damages, a court order preventing Gawker from using the screenplay and attorney’s fees.”

Read more about the re-filed lawsuit on The Hollywood Reporter.

iMediaEthics has written to Tarantino’s lawyers and Gawker for comment.