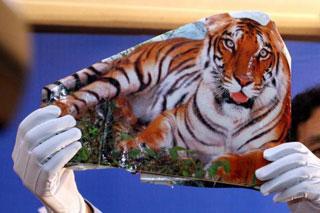 The police held the poster farmer Zhou used to stage his fake photo.

Zhou Zhenglong, a farmer and now famed Chinese Fauxtographer won’t be going to jail after all.

Welt Online reported, “Last October, he emerged from the woods in Shaanxi with his claim of a tiger sighting, plus dozens of digital photos. His claim was immediately embraced by officials in Shaanxi, who awarded him 20,000 yuan (about US$2,920) and much praise at a press conference little more than a week later.”

Reuters reported, ” Zhou, who had been given a 2 year jail term for fraud and illegally possessing bullets in September, had the sentence suspended at his appeal, Xinhua news agency said.”

Reuters continued, “The court took note of the defendant’s admission of guilt and ‘obvious regret’ and gave Zhou a three-year reprieve, but a 2,000 yuan fine and an order to give back the cash reward were upheld, the Beijing News said in a separate report.”

The Xinhua news service reported that Zhou’s lawyers said  that Chinese officials shared in the responsibility for the fraud. Apparently,  Zhou’s sighting a rare tiger was “too good to check” for authorities as the news promised a boom in local tourism.  Indeed, many government employees were fired after the truth came out.

Welt Online said the hoax unraveled after “someone came up with an old poster with a photo that looked strikingly like the tiger and posted it online, the public called for an official investigation. But Shaanxi officials stuck to their story. With a rare tiger in their area, the officials knew they could bring in a lot of money by boosting tourism and creating a nature reserve, said Yu Hai, a sociology professor at Fudan University, in a phone interview this week.”

It was only after “increasing pressure” that officials finally  “confirmed the photo as a hoax ” and Zhou was taken into custody on fraud charges. Turned out Zhou had cut the tiger out of the poster, placed it in a wooded area and photographed it with a borrowed digital camera.

Another fauxtography scandal rocketed through the Internet earlier this year when a prize-winning photo showing rare antelope was revealed to have been photoshopped.