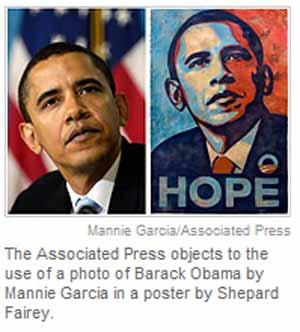 AP may have a problem with the now famed graffiti artist’s use of a photo for his “HOPE” Obama poster, but the actual photographer, Mannie Garcia, publicly said he doesn’t mind.  That affirming statement could impact any law suit.

Shepard Fairey, creator of the famous Obama Hope poster, is now suing the Associated Press (AP) “to refute the AP’s baseless assertions of copyright infringement.” It will be interesting to see how this plays out, with the AP and Garcia both claiming rights to the photo. Garcia commented on the lawsuit to the Times: “I don’t condone people taking things, just because they can, off the Internet. But in this case I think it’s a very unique situation…If you put all the legal stuff away, I’m so proud of the photograph and that Fairey did what he did artistically with it, and the effect it’s had.” He says Fairey did something “artistically with it.” But the key question is –was it substantially changed from the original photo?

AP  demanded payment from the poster maker and a cut of profits to boot, the NY Times reported. Any AP action will be messy, as Mannie Garcia, the freelance photographer who snapped the image, says he has clear evidence that he owns the rights – not the AP.

Fairey is represented by the Fair Use Project at Stanford Law Center. In a statement, FUP said he did nothing wrong and “should not have to put up with misguided threats from The A.P.”

What are the rules when an artist uses a copyrighted image? FUP says Fairey is protected by the Fair Use Doctrine, which allows for reproduction of copyrighted materials for criticism, comment and other purposes. It gives four criteria – the most relevant here is “(3) the amount and substantiality of the portion use in relation to the copyrighted work as a whole.” Can the AP prove the image is substantially similar? Fairey’s lawyers say no; that he turned it into a “stunning, abstracted and idealized visual image that created powerful new meaning and conveys a radically different message.”

AP spokesman Paul Colford told NYT the AP was surprised by Fairey’s “failure to recognize the rights of the photographers in their works.” He said the AP and Fairey were close to a settlement before he filed the suit, and the AP “made it clear that a settlement would benefit the A.P. Emergency Relief Fund, a charitable fund.” (Whoa! Is Colford trying to grab the high ground to create public support for suing an artist? Are readers supposed to say “oh, well the money was going to a good cause, so the AP isn’t being greedy. It has every right to take it from a potentially-innocent artist?”)

Total side-note: There are two versions of the AP article “AP Alleges Copyright Infringement” with two different spellings of AP photographer Garcia’s first name (Manny and Mannie). Both are dated Feb 4, 2009 with no transparent correction. Apparently, the AP writer spelled an AP photog’s name wrong, corrects it  – and then just pretends it never happened? I’ve heard of poor fact-checking, but spelling your own photogs name wrong? That’s just lazy.