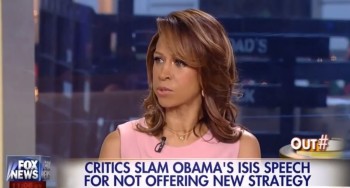 Fox News and Fox Business Network suspended contributor Lt. Col. Ralph Peters after he called President Barack Obama a “total p*ssy* on air, and contributor Stacey Dash for saying of Obama “I felt like he could give a s**t — excuse me, like he could care less.”

Both were suspended for two weeks over their comments in response to Pres. Obama’s Dec. 6 speech from the Oval Office about terrorism, ISIS and the San Bernardino shootings.  Bill Shine, Senior Executive Vice President of Programming issued a statement, which Fox News sent to iMediaEthics, saying:

“Earlier today, FOX contributors Lt. Col. Ralph Peters and Stacey Dash made comments on different programs that were completely inappropriate and unacceptable for our air. FOX Business Network and FOX News Channel do not condone the use of such language, and have suspended both Peters and Dash for two weeks.”

Fox Business’ Stuart Varney called Peters out on air for his comments, which were made during Varney’s show on Fox Business Network. Varney said, according to Salon, “I can tell you are super angry, and I asked you what your reaction was, but I have got to call you — you can’t use language like that on the program, OK? I’m sorry.”

Peters’ comments are below.

“I did not feel better,” she said. “I didn’t feel any passion from him, like you said Andrea, I felt like he could give a s**t, excuse me, he could care less.”

Dash’s comments are below, via The Wrap:

On Fox, Ralph Peters calls Obama a "total pussy" and Stacey Dash says he doesn't "give a shit" about terrorism. Fliippin' embarrassing

Critics can say what they want about the president's policies, but no need for such crude language on the air

Peters retired in 1998 after 22 years in the U.S. Army after becoming a Lt. Col. He writes books, columns and essays, his bio says.