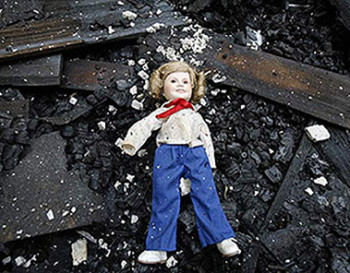 iMediaEthics launched an investigation after bloggers and others questioned the validity of a Reuters photograph that featured an unburned doll lying on top of the charred remains of a California house. Now Reuters is stonewalling efforts to bring in fire engineering experts to analyze high-resolution photographs.

iMediaEthics is also investigating the possibility that a Reuters photojournalist trespassed on private property to obtain photographs of a tragically destroyed home. In the face of misogynist, hate-filled campaign against Rhonda Roland Shearer and her daughter, by a “friend” of the photographer, Shearer continues to ask Reuters to live up to the standards of ethics and integrity professed by its CEO, Tom Glocer.

I tried to imagine what it would feel like to be evacuated from my house and then to open my laptop in a cheap motel or relative’s basement, only to find that images of my little girl’s doll and other personal items, strewn through the ruins of my house, were now for public consumption on Reuters and Yahoo! News galleries.

Thankfully, for me, this was just a thought experiment. Others may not be so lucky. So far, we have been unable to locate them or the house, despite an extensive search. They likely are still unaware that their daughter’s Shirley Temple doll and the interior of her bedroom is being shown globally online, on Reuters, Yahoo and ABC news sites.