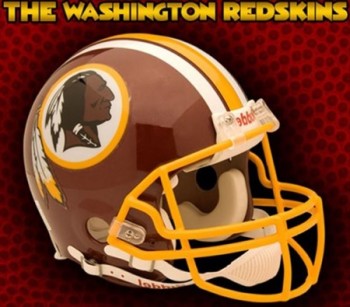 Three news outlets said last week that they aren’t going to refer to the National Football League’s Washington Redskins by the team’s name (“Redskins”) because they deem it offensive.

Slate led the pack with an August 8 announcement that it will no longer publish the name of the team, outside of \direct quotes.  As Slate explained, “For decades, American Indian activists and others have been asking, urging, and haranguing the Washington Redskins to ditch their nickname, calling it a racist slur and an insult to Indians.”

After Slate‘s announcement and in response, The New Republic said it would also stop using the team’s name.  In a tweet, New Republic editor Franklin Foer said the magazine was “changing @tnr stylebook” and in an email to DCist, Foer said the name is “offensive.”

The @davidplotz case against the moniker of DC football team is air-tight. We’re changing @tnr stylebook. http://t.co/9S1PaKbCsn via @slate

Also, Mother Jones said it was dropping the word, after Slate made the case.  In an August 9 statement, Mother Jones’ political blogger Kevin Drum said that the magazine’s style guide dictates reporters refer to the Redskins as “Washington’s pro football team.”

Despite the protestations of the name, Washington team owner Dan Snyder has previously stood by the name. iMediaEthics has contacted the team for a response to the recent media announcements of banning the name.

While Slate said it would avoid using the team’s name, the reason was not because the name is so terrible, in its opinion.  “While the name Redskins is only a bit offensive, it’s extremely tacky and dated—like an old aunt who still talks about ‘colored people’ or limps her wrist to suggest someone’s gay,” Slate wrote.

Slate also pointed out that its decision to drop the term likely won’t affect the team given that “our coverage is sporadic.”

The main exception to the new rule is direct quotes, Slate wrote:

“To be clear, though we’re striking the word from our vocabulary, we will not bowdlerize quotes—if a public official utters the nickname in a newsworthy speech, we will not strike the word Redskins.”

Further, Slate noted that its decision “has no bearing on” the Washington Post, which until this month was owned by the same company as Slate.

However, earlier this year, Washington Post ombudsman-at-the-time Patrick Pexton reported that the newspaper had “recently published a spate of columns, by different writers, calling” for the Redskins to change its name “to avoid its racist overtones,” as iMediaEthics wrote.  Pexton added for his own part:

“Native Americans are not mascots or historical bygones to be imitated; they’re flesh-and-blood Americans, as much a part of the warp and weft of the living fabric of this country as George Washington or Thomas Jefferson.

“I don’t think this city’s football fans or the Holton-Arms swimmers are racist. I’m sure they feel they’re honoring the warrior spirit. But most Native Americans don’t feel that way. We honor them most by listening.”

iMediaEthics has reached out to Slate asking what prompted the decision and will update with any response.

The New Republic told iMediaEthics by email that it had no further comment concerning its decision. Mother Jones sent iMediaEthics a statement from its copy editor Ian Gordon:

“The name is plainly offensive, and it has no business in our most-watched sport. As a copy editor, I always am a bit reluctant to tweak our style guide, and as a former sportswriter, I don’t take this stuff lightly. But when we polled the office, there was overwhelming support for the change. Besides, the [Redacted] has a nice ring to it, don’t you think?”

Slate, et al not the first to ban ‘Redskins’

In June, the Buffalo News’ Tim Graham said he wouldn’t use the term anymore because it’s “so harmful to other people,” as Poynter reported.

“For any sports fan, the word simply falls from the lips without thought. And that’s the problem with uttering a racial slur so cavalierly over the years: We don’t think about the R-word’s meaning anymore,” Graham said in a blogpost.

Last year, Derek Donovan, the public editor for the Kansas City Star’, explained that the newspaper refuses to use the team’s Redskins name in stories because it’s “egregiously offensive” and a “racial epithet.” (This, despite the fact that Kansas City’s professional football team is called the “Chiefs”).

Check out all of iMediaEthics’ stories about the Washington Redskins’ owner Dan Snyder.