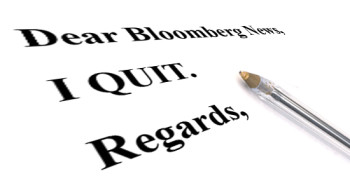 Editor Ben Richardson resigned from Bloomberg News this month. He claimed his resignation was because Bloomberg News was pulling punches in its reporting on China.

He told Jim Romenesko in an e-mail published March 24 that he quit Bloomberg because the company “made misleading statements in the global press” and “mishandled” reports on China, specifically an article about Chinese politicians being linked financially to a wealthy man.

iMediaEthics asked Bloomberg for comment on Richardson’s claims and for confirmation he quit as opposed to being fired. Bloomberg spokesperson Ty Trippet told iMediaEthics by e-mail, “We’re declining to comment other than to confirm that he left the company on March 3.”

Last November, the New York Times reported that anonymous sources at Bloomberg News said Bloomberg News was self-censoring its reporters’ articles about China. The Times’ anonymous sources claimed  that a critical article about “the hidden financial ties between one of the wealthiest men in China and the families of top Chinese leaders” was pulled.

Bloomberg News denied that it killed the stories, telling iMediaEthics at the time, “As we were very clear with the Times, it is absolutely false that we postponed these stories due to external pressure. We are disappointed that they chose to publish a piece that claims otherwise.”

Yet, according to the Times, Richardson is “the third reporter or editor to leave” Bloomberg since the reports about the article on the hidden financial relationships was reportedly killed.

Richardson stated in his e-mail to Romenesko about quitting:

“I left Bloomberg because of the way the story was mishandled, and because of how the company made misleading statements in the global press and senior executives disparaged the team that worked so hard to execute an incredibly demanding story.”

In his e-mail to Romenesko, Richardson also claimed that Bloomberg’s Clark Hoyt agreed that the story shouldn’t be published but that Hoyt’s investigation never included “contact[ing] any of the team who worked on the story to discuss” the facts and circumstances.

Hoyt was appointed last year as Bloomberg’s first Independent Senior Editor. At the time, Bloomberg was facing serious reputational fall-out after the revelation that its journalists were committing a conflict of interest by accessing private, supposedly secure, personal information from client databases without permission. The new role for Hoyt was created after Hoyt’s hired gun review of Bloomberg’s practices in light of what was a troubling security breach for its paying clients.

iMediaEthics asked Hoyt for a response to Richardson’s claims that he didn’t contact the reporting team in reviewing the article.

The Huffington Post noted that Richardson’s LinkedIn profile now lists him as “a freelance journalist and consultant.” According to the New York Times, he left Bloomberg March 3.