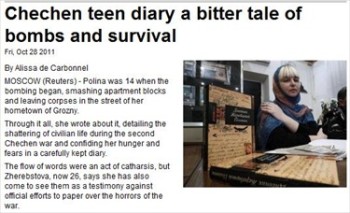 Reuters unpublished this article after it was questioned by the Guardian over similarities. (Credit: Reuters, screenshot)

Ad Week noted that “no official charges of plagiarism have been made thus far, and the reason for the similarities isn’t fully clear yet.”

According to Ad Week, a Thomson Reuters spokesperson said it was “looking into the matter.” Later, Reuters pulled the story.  Ad Week published from an “internal email” from Reuters editor Ralph Boulton explaining that the story was pulled “because, though it included original reporting, it is too similar to a piece already published by The Guardian on the same subject to be appropriate for publication. No substitute story will be issued.”

Elder’s article, “The second Chechen war: a Grozny teenager’s diary” was published by the Guardian Sept. 30.   Alissa de Carbonnel’s article, “Chechen teen diary a bitter tale of bombs & survival” was published by Reuters Oct. 27 (and unpublished Oct. 28).  StinkyJournalism notes that while Reuters has unpublished its U.S. web version of the story (the link now re-directs to a “Page Not Found” notice), Reuters’ Indian version still hosts the story in question.

Both stories started with the same first seven words:  “Polina Zherebtsova was 14 when the bombs…”

StinkyJournalism’s review found numerous phrasing similarities in reporting the same content.  For example, both reports couple threats against Zherebtzova and her search for a publisher:

And, both stories similarly present Zherebtsova’s discovery of her publisher:

And, one more example:

iMediaEthics has written to Elder and Reuters for comment and will update with any response.