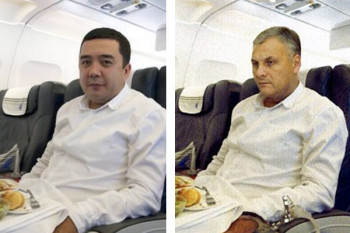 Alexander Khoroshavin gets a new body for his head via Photoshop. The photo was faked to show Khoroshavin under arrest. Note the handcuff was also added to the image on the right. Courtesy of RIA Novosti. (iMediaEthics illustration)

The photo was doctored to put Khoroshavin’s head on a man sitting in an airplane seat and to add handcuffs so that it appeared Khoroshavin was handcuffed to the seat. Meduza, a Russian news website, pointed out that the original photo was published back in 2013 on a website Vox Populi and the governor’s head was Photoshopped onto another man’s body.

Khoroshavin was arrested earlier this month “in connection with a bribery case,” Reuters reported, based on reports from “local news agencies.”

“The photo that was published in our photo bank by mistake has been deleted and was not verified. We apologize to our subscribers,” a spokeswoman for Rossiya Segodnya was quoted as saying by the Moscow Times.

The RIA Novosti Media Team confirmed the authenticity of that statement to iMediaEthics.

Rossiya Segodnya is “Russia’s state-run media conglomerate” and was “established by a Kremlin decree” in 2013.  RIA Novosti is part of Rossiya Segodnya.

The doctored photo of Khoroshavin as seen on RIA Novosti’s website. It has now been deleted. (Credit: RIA Novosti, via Moscow Times, screenshot)

See below the original photo from Vox Populi, a “Kazakh photo-journalism website.” The photo was originally taken for a “story about airline food,” Meduza reported.

The original photo, above, showed a man sitting in an airplane seat with food on his tray table. . (Credit: Vox Populi)

The photo was busted as fake by social media site RIP Novosti, according to the Moscow Times.

RIA Novosti apologized for publishing the fake photo and unpublished it from its photo bank, Meduza reported.