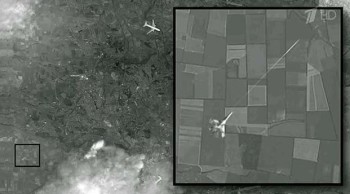 Russia’s Channel 1 was hoaxed by a fake photo purporting to show the Malaysian Airlines flight 17, which crashed in July in Ukraine, being shot down by a Ukrainian fighter jet.

Channel 1 claimed it got the photo from an e-mail from MIT graduate George Bilt to the Russian Union of Engineers, BuzzFeed reported.

But, neither Bilt nor the Russian Union of Engineers verified the photo, and Channel 1 aired the photo as real.

Bilt, whose email was cited by Channel 1, told BuzzFeed he was only passing on an image he found and that he didn’t have any “knowledge or means of proving and researching if this was an authentic satellite photo or not.”

“I am quite unhappy that my bona fide informal attempt possibly became a source of yet another battle in a media war,” he told BuzzFeed. “This was definitely not my intention. I am also not looking for a cheap fame. This tragedy is simply too awful to gain from it.”

Bilt added that Channel 1 is “either desperate or totally unprofessional” to run the photo.

The Russian Union of Engineers’ Vladimir Saulyanov said, according to Raw Story, “How could we check it? It came to us from the Internet.”

When Channel 1 aired the photo, it said that it was “sensational photographs presumably made by a foreign spy satellite in the last seconds of the Malaysian Boeing’s flight over Ukraine,” according to Reuters.

But the image was doctored and found online. A portion of the image predates the Ukranian jet crash by about two years, BuzzFeed reported. There were other problems with the photo, including that the jet shown in the photo “turned out to bear a suspicious resemblance to the first Russian-language Google Images result for ‘Boeing view from above'” and the logo for Malaysian Airlines was “in the wrong place.”

The image’s time was also wrong and the placement of the jet was also incorrect, BuzzFeed reported.

The U.S. State Dept. called the photos “preposterous” after they were released, the Guardian reported.