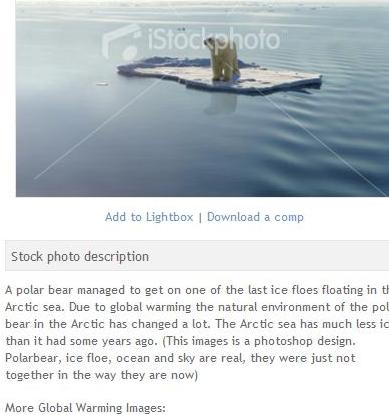 The iStockPhoto source for the photo accompanying a Science journal letter states that the photo is composite of multiple images (meaning Photoshopped) Science neglected to include this important information--that it was a photo illustration and not a documentary photo, in its caption. (Credit: iStockPhoto)

News Watch’s May 8 report noted that the iStockphoto of a single polar bear on an ice floe, is photoshopped confection comprising multiple images –not a single documentary photo.  The credit line for the photo reads on its iStockphoto Web page reads: “This image is a photoshop design. Polarbear, ice floe, ocean and sky are real, they were just not together in the way they are now.” Here is the polar bear image.

But, while the iStockphoto’s caption discloses that the image is photoshopped, Science neglected to include this important disclosure  in its caption.

News Watch wrote: “What does the use of a faked photo say about the scientific credibility of the journal in question?”

Considering the letter asserts and defends the credibility of climate scientists under fire for alleged deceptions–using a fake photo probably wasn’t the best idea in StinkyJournalism’s view, as it gives fodder for doubt.

As background: The May 7 letter in Science opens with the authors writing they are “deeply disturbed by the recent escalation of political assaults on scientists in general and on climate scientists in particular.”  The letter defends scientists and their “fundamental conclusions about climate change.”

Watts Up With That noted May 7 that the letter is defensive and condescending.

Prison Planet also picked the story up May 9.

News Watch suggests that while the scientists who signed the letter are “generally well recognised experts in a number of fields…only about 5-10% are involved in climate research.”  The list of scientists is available here for anyone who wants to verify this claim.

For fake photo watchers, another version of the photo, with a penguin in the place of the polar bear, is available on iStockphoto.