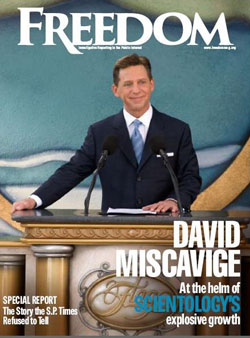 The most recent cover of Freedom, a magazine published by the Church of Scientology. (Credit: FreedomMag.org)

Unemployed journalists, check it out. Want to do enterprising, investigative journalism and get paid for it?

Freedom, a magazine published by the Church of Scientology since 1968, is looking to hire experienced journalists to further their mission of “Investigative Reporting in the Public Interest,” according to news site TrueSlant. The ad has been joke fodder for TrueSlant and Reddit among others, but it also raises a serious question; is Freedom actually journalism, and should they be advertising a job for journalists?

Scientology is a religion founded by science fiction author L. Ron Hubbard and based on the self-help system he developed called Dianetics.  A main tenet of the religion is that humans are immortal alien spiritual beings called thetans, trapped on planet Earth in a physical “meat body.”

Freedom‘s job ad, posted on JournalismJobs.com and TampaBayJobs.net, among others, says the publication is looking for reporters for “short and long-range assignments,” covering “human rights and social betterment issues.”

While Freedom certainly does its share of investigations, most journalists would be hard-pressed to call what the magazine produces “journalism.” First of all, Freedom is not exactly independent, being as it is an arm of the Church of Scientology. Moreover, recent coverage appears to focus almost exclusively on responding to and attacking critics of Scientology, a very narrow interpretation of the “human rights and social betterment issues” the publication purports to follow.

“Since Scientology is known for attempting to stifle anti-Scientology rhetoric with lawsuits and disinformation, would it be possible to do quote-unquote unbiased reporting for the institution?” Matt Stroud asks, writing at TrueSlant.

Gawker also points out that the new project the magazine is hiring for is likely related to Freedom’s response to a recent special report by the award winning St. Petersburg Times, writing,

Freedom magazine, the church’s official reporting arm, wants “experienced investigative reporters” in the Tampa Bay area – precisely where the St. Petersburg Times, a newspaper which recently published a critical series on the church, is based.

Of course, the other reason may be that the Church of Scientology is headquartered in Clearwater, Florida, near Tampa and St. Petersbug. Nonetheless, if you’re truly interested in investigative journalism on human rights and social betterment, this might not be the job for you, despite their attractive ad. Frankly, if you’re interested in ethical journalism at all, as most regard it–fair, accurate, unbiased –then this is probably not the job for you.

As far as a strict definition of journalism is concerned, The Church of Scientology probably shouldn’t have even advertised it on a website for “journalism” jobs, which raises the question, does JournalismJobs do any vetting of the ads they publish?

We’ve contacted them to ask and will publish any response as an update.