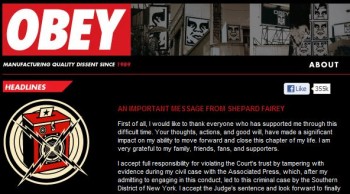 Shepard Fairey, the artist who created the Obama Hope poster with an Associated Press photo, was “sentenced to two years of probation, 300 hours of community service and a $25,000 fine,” related to his lawsuit with the Associated Press over the use of and copyright for the photo, Gothamist reported.

The New York Times added that Fairey’s 2009 lawsuit “claimed he had used a different photograph, but later admitted that he had been mistaken and had tried to cover up his mistake.”  Fairey said he had “destroyed documents and submitted false images,” as the Los Angeles Times reported.  In 2011, the AP and Fairey’s company Obey Clothing settled their lawsuits.

Fairey admitted this month that “I accept full responsibility for violating the Court’s trust by tampering with evidence during my civil case with the Associated Press.”  Fairey added that he “believed, and still believe, that I had a very strong Fair Use case, which I could have prevailed,” but said he altered evidence because he was “embarrassed and scared.”

“The damage to my own reputation is dwarfed by the regret I feel for clouding the issues of the Fair Use case. I let down artists and advocates for artist’s rights by distracting from the core Fair Use discussion with my misdeeds.”

The AP issued a Sept. 7 statement attributed to its president and CEO Gary Pruitt that reads

“After spending a great amount of time, energy and legal effort, all of us at The Associated Press are glad this matter is finally behind us. We hope this case will serve as a clear reminder to all of the importance of fair compensation for those who gather and produce original news content.”

UPDATE: 9/11/2012 5:00 PM EST We wrote to Fairey seeking further comment. Jay Strell responded that Fairey has no further comment outside of his statement.