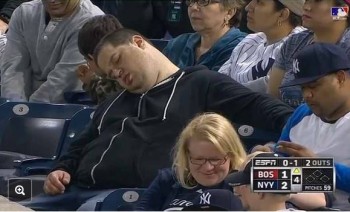 A man who was shown on national TV sleeping during a Yankees-Red Sox game has filed a lawsuit against ESPN, Major League Baseball and Yankees, the New York Times reported.

ESPN had focused its camera on Rector, who had fallen asleep during an April 13 game, the lawsuit states, according to the Times. He said ESPN’s broadcasting team of Dan Shulman and John Kruk  “unleashed an avalanche of disparaging words.”

Major League Baseball published a video clip of Rector sleeping during which the two ESPN announcers commented Rector was “oblivious.”

“The plaintiff continues to suffer severe emotional distress because of (the) defendants’ extreme and outrageous conduct,” the lawsuit states, according to NJ.com “(The) defendants intentionally or recklessly made statements that created a high degree of risk of harm yet deliberately proceeded to act with conscious disregard or indifference to the risk.”

Below, see a clip from the game.

The New York Times noted there is a discrepancy between the lawsuit and the video clips showing Rector sleeping. While the lawsuit says he was called “fatty” and “stupid,” the Times reported “neither Mr. Shulman nor Mr. Kruk uttered such insults in the clip. It is unclear whether they commented later in the game on Mr. Rector’s lengthy nap.”

ESPN spokesperson Josh Krulewitz told iMediaEthics by e-mail: “The comments attributed to ESPN and our announcers were clearly not said in our telecast.  The claims presented here are wholly without merit.”

Rector did become “the target of some online ridicule” including from online commenters, bloggers and tweeters, according to the New York Times.

The lawsuit brought even more attention to Rector’s nap in the stadium, NJ.com pointed out. Because of the lawsuit, Rector’s name has been attached to the viral video clip, and the YouTube video got hit “more than 600,000 times over the past 24 hours.”

Rector declined to comment to the New York Post, which ran a follow-up story after Rector agreed to take a posed photo “to counteract the humiliating photos of him making the rounds online.”

NJ.com uploaded the lawsuit. The New York Times, New Yor Post and other outlets commented that the lawsuit contains typos and is written in an “idiosyncratic” way. Read it below.