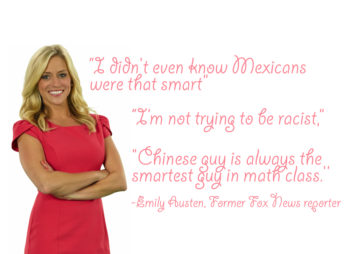 “I’m not trying to be racist,” Austen said in the video after commenting on the “Jews in Boca,” not knowing “Mexicans were that smart” and that the “Chinese guy is always the smartest guy in math class.”

According to the Tampa Bay Times, Austen was “a contract employee, meaning she worked and was paid per event.”

“We were made aware that Emily Austen appeared in a social media video unaffiliated with FOX Sports in which she made insensitive and derogatory comments. She was not speaking on behalf of FOX Sports, nor do we condone any of the statements she made in the video. Emily has been advised that her comments were unacceptable, and she is not scheduled to appear on any upcoming FOX Sports Florida or FOX Sports Sun broadcasts.”

Barstool Sports’ video of the chat with Austen is gone. In a statement on its website it said it tried to edit the video, which was recorded on Facebook Live, but ended up deleting it.

“So we tried an experiment today. We used Facebook Live for the rundown so people could watch it raw. Then we (Hank probably) somehow deleted the video which was supposed to be edited for the actual show today. Long and short of it is if you didn’t watch it in real time you missed it. But being the team player I am, the captain I am, the leader I am, I just put together 8:35 seconds of hell.

“Also this should teach everybody a lesson. When we say we’re going live you better watch cause it may never be repeated.”

Deadspin commented, “The suspicious deletion of a video in which a guest makes racist comments is currently roiling the Barstool Sports subreddit.”

Despite that, video of the interview has been uploaded to video sharing site Vimeo. At the beginning of the video as the camera is being set up, someone warns “This is live by the way so don’t say anything you don’t want…”

iMediaEthics has written to Austen’s agents.