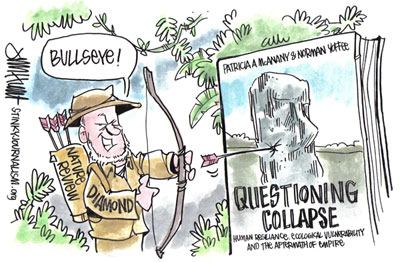 Molika Ashford's February exclusive story about Jared Diamond's undisclosed conflict of interest in reviewing a book critical of his own work was the most read media pick this year. (Credit: Jim Hunt)

3. Another Jared Diamond story made our list of most trafficked stories.  The March 4 story (see here) “Nature (Journal) responds to charge that Jared Diamond’s book review had undisclosed conflict” by Molika Ashford reported that Nature claimed that Diamond’s aforementioned review did disclose Diamond’s authorship of Collapse.  However, as Ashford explained, that wasn’t iMediaEthics’ problem with the review. “Diamond didn’t disclose clearly enough in his review that Questioning Collapse is a book specifically and predominately critical of his own work.”

4. Fake photo stories are a favorite on iMediaEthics.  The Sept. 23 story by Sydney Smith (see here) “Doctored Photo of Ian McKellen at Pope Protest Circulating Web” reported on an Ian McKellen photo that was doctored to change the text on McKellen’s shirt.  McKellen’s shirt originally read “Some People Are Gay. Get Over It!” As a joke, Greg Stekelman Photoshopped McKellen’s shirt to read “I’m Gandalf and Magneto. Get Over It!” Stekelman posted the photo on Twitter, from where it went viral and was picked up by media outlets including The Advocate.

8. “Why do News Organizations allow Users to Comment Anonymously,” an April story by Sydney Smith (see here.) featured a couple of high-profile media cases where the courts have gotten involved.  In New Hampshire, courts decided that a commenter under the pseudonym Brian Battersby was allowed to remain anonymous. In Ohio, the Cleveland Plain–Dealer revealed that an anonymous commenter’s information indicated a judge was behind the comments.  That judge, Shirley Strickland Saffold, filed a lawsuit against the newspaper.

9. “Are you Journalist Enough for a Press Pass?”  Molika Ashford put forth that question in her March story here.  Ashford’s story reports on blogger struggles to get press passes and press credentials.

10. Molika Ashford’s February story, “Forbes’ Misleading ‘America’s Worst Winter Weather Cities’ List,” explained issues in a Forbes report ranking the U.S. cities with the “worst” winter weather.  The Forbes report only ranked the 50 largest cities in the U.S. and not all cities in the U.S., despite misleadingly titling its report as representative of all U.S. cities.  See the story here.