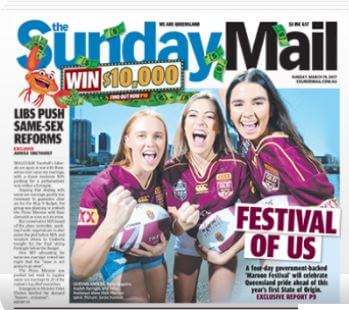 While the story was published six months ago, the Australian Press Council just ruled April 29 on a complaint about the Mail‘s Oct. 16 print headline, finding it inappropriate.

The Mail‘s editor, Peter Gleeson, strongly disagreed with the ruling, telling iMediaEthics, “This adjudication is the worst I’ve seen in 35 years in journalism.”

He added, “It’s nonsensical, farcical, comical and you’d think a body charged with the responsibility of overseeing Australia’s newspaper standards had better things to do than to second guess an editor’s mind.”

In response, the press council told iMediaEthics by e-mail, “The Press Council stands by the adjudication and continues to be concerned about any reporting that appears to trivialise matters related to sexual assault, or which may discourage women from coming forward to make such allegations.”

The two-page spread about the accusations against now-President Trump, headlined, “Knockers Come Out,” was subheadlined “Number of Trump accusers swell.” To top this off, the visuals on the page included photos of the women and a large photo of Trump, according to the press council.

The Mail‘s Gleeson provided iMediaEthics a copy of the pages in question. 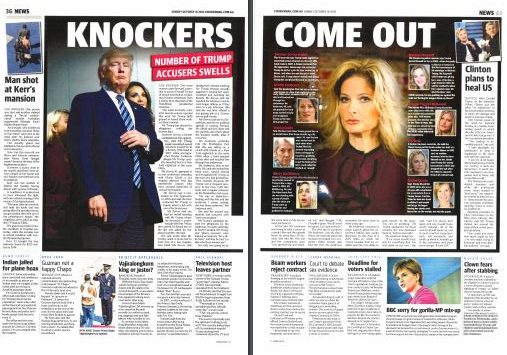 The Mail‘s two-page spread “Knockers Come Out” in question. (Provided)

Given the juxtaposition of women, the topic of sexual accusations, the term “knockers,” and the subheadline’s “suggestive wording,” the press council asked the Mail about the headline following a complaint.

The Mail denied it was using slang for breasts and instead claimed it was trying to use the word “knocker” as a perhaps less-known synonym for “critic,” according to the press council.

The press council didn’t agree it was a fair headline, though, and ruled that the Mail “failed to take reasonable steps to avoid” offending readers without any public interest. If readers read “knockers” as referring to breasts, then it trivialized the women’s complaints and sexualizes them; if readers interpreted it as critics, it still could trivialize sexual harassment as “mere criticism,” the council said.

The Mail‘s Gleeson noted he wasn’t aware of how many people complained about the article given the council doesn’t share that information and will respond to one complaint.

“They have automatically assumed my mind is in the gutter,” he e-mailed iMediaEthics. “Knockers in Australia can mean critics. The colloquial slang is breasts. Which is it in the context of this complaint? I argued it as critics. They made a ruling it was breasts. The ruling says more about the morals and ethics of the adjudication panel than it does about the Sunday Mail.”

The Australian Press Council was set up in 1976 and is a voluntary self-regulatory body for the Australian print and online media. The press council noted to iMediaEthics, “Any APC member publication is obliged to publish our adjudication when there is one concerning that publication, no matter whether the complaint is upheld or not upheld.”

Gleeson told iMediaEthics the Mail published the adjudication on page 2 of the April 30 print edition.