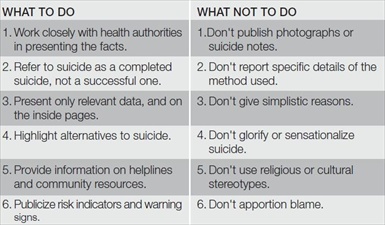 See above, some tips for reporting about suicides from the University of Hong Kong's Centre for Suicide Research and Prevention. (Credit: Univ. of Hong Kong)

Edward Wasserman, journalism ethics professor at Washington and Lee University, blogged recently about the ethics of reporting on suicides.

Ordinarily, Morrissey’s and most other suicides wouldn’t register on the media radar and wouldn’t be reported, Wasserman wrote.

But, StinkyJournalism has found that Morrissey’s death has been picked up and reported heavily by the mainstream media including The New York Times, The Washington Post,  and elsewhere. An ABC News story questioned “Did Depression or an Alleged Bully Boss Prompt Editor’s Suicide?” while The New York Post exclaimed “‘Bossed’ to Suicide: ‘The bullying was not going to stop.'”

“Because Morrissey’s relations with his boss had soured, his suicide has been seized upon as a case of workplace bullying,” Wasserman wrote. As a result, headlines and stories are “demonizing [Morrissey’s] boss and longtime friend, editor in chief Ted Genoways.” Anonymous sources and out-of-context facts are supporting many of these stories “to suggest that Morrissey was hounded to his death by an office tyrant.”

However, Wasserman’s research hasn’t been able to find much substantive proof for the bullying claims.

“The evidence of bullying is paper thin. The allegations against Genoways are a grab-bag of claims of favoritism, occasional harsh language and the like, capped by his putting Morrissey on a week’s paid leave after a clash with a co-worker.”

Wasserman argued the problem with this situation is that there are “peculiar ethical rules that govern coverage of suicide.”  Problems for journalists in reporting on suicides include the intrusive nature of the reporting and the “irreducible mystery at its core.”  Why did the person do it?

As a result, Wasserman says “the media steer clear” and generally the only reported suicides are ones that “take place in public, involve public figures – or exemplify some larger social problem.”

In Morrissey’s case, Wasserman finds the death has been thrown under the umbrella of workplace bullying – without having enough hard evidence to support the claims.  And, because there is a lot of research on the social issue of bullying, his suicide became “legitimately newsworthy.”

“That’s because under the ethical strictures journalists subscribe to, if Morrissey died because he was lonely and despondent and dead-ended and because he over-reacted to routine workplace miseries, his suicide wouldn’t be any of the public’s business. It wouldn’t be a story.”

Brendan Wolfe, a commenter on Wasserman’s article who describes himself “being close to Kevin Morrissey and his suicide,” wrote at great length in several back-and-forth comments with Wasserman.  A search of Virginia Quarterly Review’s website turns up a summer 2010 book review by a Brendan Wolfe published by the journal.

Ultimately, Wolfe wrote “I think you and I agree about the tenor of the media’s coverage; however, we seem to very much disagree about the facts of the case and what can be defined as good management.”

Tom Bissell, a contributing writer to the Virginia Quarterly Review, wrote for the New York Observer in defense of boss Ted Genoways.  In his article “From Tragedy to Trend Story,” Bissell criticized the media’s coverage of and investigation into Morrissey’s death, calling many of the stories speculative.

StinkyJournalism has written to Wasserman for his comment on the best way to report suicides.

Tips for Reporting on Suicide

Nikky Raney, a journalism student at New England School of Communications, also blogged about the ethics of the media’s coverage of suicides.  Raney likewise wrote that suicides aren’t ordinarily reported unless the incident “is part of a bigger situation.”  She cited the death of the “Craigslist Killer” Philip Markoff as an example of someone whose suicide was translated to a larger social issue – that of how inmates are treated in jail – and as such was reported as newsworthy.

Raney cited both NPR’s November 2009 and Stephen J.A. Ward’s articles on the ethics of suicide reporting.

NPR reported that Paula Clayton, a psychiatrist and medical director of the American Foundation for Suicide Prevention, advised some ways the media can carefully report on suicides without causing copycat suicides.  (The first documented copycat suicide  reportedly resulted from Goethe’s 1774 novel The Sorrows of Young Werther) Journalists shouldn’t offer too many details about the suicide like where or how it happened.  Also, journalists “Should report on the many complex factors that may have led up to the suicide.”

Stephen J.A. Ward wrote in November 2009 wondering if journalists exploit tragedy, specifically in reporting suicides.  Ward is a professor of journalism ethics at the University of Wisconsin-Madison, as well as the director of the Center for Journalism Ethics.  He wrote that while “the pain of publicity is real,” journalists may have to report these sensitive stories.

“It is a mistake to see reporting on these tragedies as, unavoidably, exploitation. Whether it is exploitation depends on how the event is covered,” Ward wrote.  He furthered that sometimes suicides are indeed newsworthy, echoing Wasserman by citing such examples as when the suicide is committed by a public figure or is part of a larger issue.  Ward advised that “Journalists should maintain a daily record of events so that uncomfortable topics are discussed publicly. In this way, suicides and the death of children to disease — and many other problems — are not hidden behind closed doors, leaving public discussion to feast on rumour and speculation.”

Several ways Ward suggest journalists can responsibly report on suicides without exploiting or causing excess harm, noting that ethics guidelines often advise to “minimize harm,” but not to “do no harm,” include:

“Minimizing harm is the proper principle since journalists do some harm to someone with almost every story. A negative book review harms the book sales for the author; reporting that Mary appeared in court harms Mary’s reputation. Such harms are justified because they are part of journalism’s social role to inform the public and comment freely. “

More of Ward’s tips for proper reporting on suicide include:

The University of Hong Kong’s Centre for Suicide Research and Prevention released a report called “Suicide and the Media:  Recommendations on Suicide Reporting for Media Professionals.”  The report combined many ethics codes and articles including those of the BBC, the Society of Professional Journalists, and the Hong Kong Journalists Association.

In 2001, the U.S. Department of Health and Human Services and the Surgeon General issued a National Strategy for Suicide Prevention, which includes guidelines for the media to follow in reporting on suicidal behavior.  For example, keep reports from being repetitive or excessive.  Also, the report had a goal to “increase the number of journalism schools that include in their curricula guidance on the portrayal and reporting of mental illness, suicide and suicidal behaviors.”

Likewise, a 2003 report published in American Behavioral Scientist by Patrick Jamieson, Kathleen Hall Jamieson and Daniel Romer advised more education for journalists on how to handle reporting on suicides.  Their report, “The Responsible Reporting of Suicide in Print Journalism,” examined the media coverage of individual suicides by the top 100 circulation U.S. newspapers in the year 2000.  They interviewed 24 reporters who covered these stories and found that “there is a need to inform reporters of the current scientific consensus that suicide contagion can result from news reporting.”

Their report also found that “The acts of suicide that were most likely to be reported met one or more of three criteria:

They furthered advised journalists to be careful when creating a narrative in which to tell the story of the suicide. “Reporters sometimes choose a narrative that misleads the public about the nature of suicide. One example of this kind of reporting is common around the end-of-year holidays. Stories about increased risk for suicide during this holiday period have been entrenched in the popular media (e.g., films) and occur with great frequency in the press.”

See more tips and tools for reporting on suicides at the Dart Center’s website here.  The Dart Center is “a resource for journalists who cover violence.”

iMediaEthics has previously written about grief reporting and some tips on “dealing with grief-stricken families.” See that report here.