The Skinny on the Murder-for-fat Hoax: MSM Need to Update Stories

The Skinny on the Fat Murderer Hoax: Media Need to Update Stories 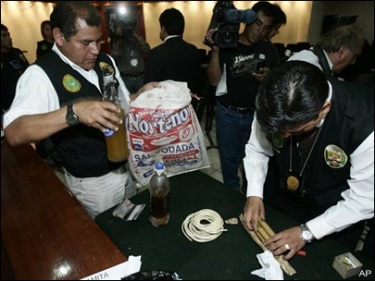 Many news outlets used this image along with the original story on, what turned out to be, the murder-for-fat hoax. It shows police officers with "evidence" from the fake "crime scene."

When a story catches international attention, but turns out to be a hoax, should media update and clarify original stories or simply post new stories covering the on-going investigation?

Take the case of the Peruvian police fabricating a fat murderer mass murder story in late November, a story that spread like wildfire around the globe.

As Sky News reports, “[Peruvian police] said victims’ bodies were held above candles while the melted fat dripped into tubs positioned below. Officers claimed three men had been arrested in the remote jungle region of Huanuco, where officials found human remains and two bottles of fat. The men had told police that just one litre of human fat could fetch $15,000 (more than £9,000).”

BBC News reported, “One of those arrested told police the ringleader had been killing people for their fat for more than three decades. The gang has been referred to as the Pishtacos, after an ancient Peruvian legend of killers who attack people on lonely roads and murder them for their fat.” (Stinky Journalism has previously reported on myth-making its way into news. See related stories section below.)

Many are reporting now the story turned out to be a complete hoax. Despite jumping on the original story, mainstream media has been slow to update readers or post corrections directly to original stories.

On December 1, Time magazine posted a story about the investigation. The article reads, “Much of the world was shocked and titillated by news of alleged fat-stealing murderers in the Peruvian jungle. But the story may have a much more sinister underbelly. Could the allegation of homicidal liposuction possibly be a smokescreen to distract attention from other crimes, including, some local journalists say, the existence of a death squad that may be operating within the country’s national police?” But the new story is exactly that: a new story. Any reader clicking on the original story sees no indication of the developments.

Sky News reported on December 3 that the man behind the story, Peruvian crime investigator Eusebio Feliz, fabricated the whole thing. Suspicion grew when medical experts pointed out that if fat was worth so much, liposuction surgeons would not toss hundreds of pounds of fat in the trash every year.

The AP reported on December 1 the story was under investigation, and, four days later, that, “The national police chief later dismissed the head of his investigations unit amid doubts over the story’s veracity — as well as suggestions that police and Interior Minister Octavio Salazar may have made up the story to squash the Trujillo death squad article, published three days before the story broke.” Yet the original AP story is still intact, out there for the world to read, and still posted on NYTimes.com and WashingtonPost.com, among others, sans correction.

The BBC News continues to run the story, not updated since November 20.

While Reuters has issued an article on the investigation into the validity of the story, they have not updated the original post.

Now that admissions have been made and the cover-up unveiled, it is pertinent to update the stories. Yet several media outlets have not reported the new developments or issued corrections. Readers who want the juicy (and false) tale of murder-for-fat can still find it, which is irresponsible of the news media.

iMediaEthics has contacted these media outlets, requesting updates. It is shame none, so far, have posted an update to the original stories and we have to make such a request.

The Skinny on the Fat Murderer Hoax: Media Need to Update Stories