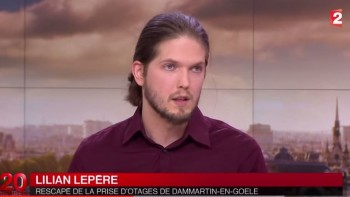 A French man named Lilian Lepère has filed a lawsuit against France 2, TF1 and RMC Radio for possibly endangering his life during the terrorist attacks in Paris in January.

Lepère hid under a sink for eight hours while the two gunmen Saïd and Chérif Kouachi were in his workplace and contacted police. “But while he was concealing himself, the TV stations France 2 and TF1 and RMC radio revealed that someone was hiding in the printing shop,” the Guardian reported.

His lawyer,  Antoine Casubolo Ferro, told the Associated Press that “delivering information without careful consideration may lead to endanger other’s lives. Journalists must think of it.”

He added to Radio France International that “the disclosure of this information in real time” caused “a certain risk” to his client.

Six hostages from a separate attack at a supermarket are suing BFMTV over their coverage reporting they were hiding in the building where a gunman was holding others hostage, as iMediaEthics reported back in April. BFMTV apologized for the “inappropriate” reporting on the hostages’ location.

According to CBS News: “In February, France’s broadcasting watchdog issued formal warnings to 16 French television and radio stations over their coverage of terrorist attacks, hostage-takings and police standoffs. The watchdog agency, known as CSA, notably accused the stations of putting the lives of hostages in danger. It also reprimanded two stations for broadcasting images of radical gunmen shooting a policeman in the head outside the offices of newspaper Charlie Hebdo.”

iMediaEthics has written to Ferro, Lepere’s lawyer, for comment. We’ve also reached out to the three outlets being sued.