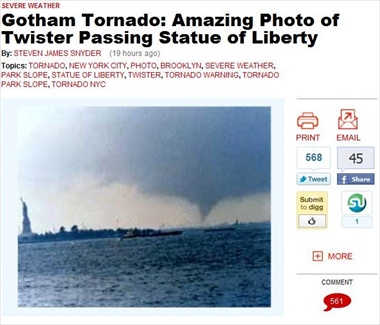 See above a detail of a screenshot from Time's blog about the tornado photo. As the Huffington Post's Craig Kanalley noted, the photo isn't from Sept 2010 as Time first reported, but from July 1976. (Credit: Time)

Time magazine’s Steven James Snyder featured a photo he found on Twitter with his blog about the Sept 16, 2010 storm and tornado warning that hit New York City.  But, the photo isn’t from the storm on Sept. 16, 2010.  It’s from a July 7, 1976 storm, a Huffington Post writer explains.

Kanalley noted that Snyder’s blog post was also tweeted and posted on StumbleUpon. “Needless to say, it got retweeted a bazillion times and did indeed go viral on Twitter, Facebook, and everywhere else,” Kanalley wrote.

The photo – with the correct datestamp – can be found on the National Weather Service Forecast Office’s website and in the book The Tornado Season of 1976.

Snyder’s Time blog hasn’t been removed, but a correction is now appended:

“Corrected 7:40 p.m: Since this story first posted, it has come to our attention that the image shown above is from 1976…but the video is indeed from Thursday. Original story follows”

Time credited its photo from Twitter user “The Dave Carlson.”  Carlson had tweeted “Here’s a photo of the Tornado in NYC: http://plixi.com/p/45484163”

In response to an inquiry from iMediaEthics, Carlson wrote that he didn’t know that the photo was dated.

“I pulled it from Google images to pull a prank on my friends. I had no idea it would become this big deal but once it started to happen I did find it funny,” Carlson wrote.

He added that “TIME didn’t contact me before posting the photo and I had only found out about it through a friend. After a few hours the writer sent an @reply to me stating the photo was from 1976. I knew that already through friends. I haven’t heard from them since.”

“It’s important to keep in mind that this could have happened to any news organization and to any journalist. But we do need to be a lot more careful vetting information and making sure we get it right  before passing on to the world.” Kanalley wrote.

The National Weather Service has found there were in fact two tornadoes Sept. 16 in New York.

iMediaEthics also reported in early September when Washington Post sports writer Mike Wise was suspended for 30 days for knowingly tweeting fake information.   Wise said at the time he tweeted the misinformation to prove a point about how media outlets will report information from the social media site without fact checking.

We also wrote June 30 about the UK newspaper the Daily Mail’s publishing a story based on a tweet from a Steve Jobs parody Twitter account.  While that Twitter account discloses that it is a parody account, the Daily Mail still reported information from one of its tweets as if it were from the real spokesperson and founder of Apple.