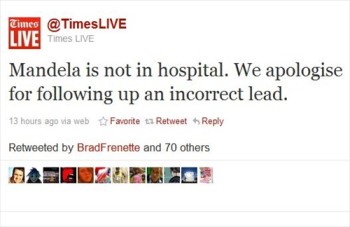 The Times tweeted apologizing for tweeting fake news that Nelson Mandela was in the hospital. (Credit: Twitter)

South African newspaper The Times apologized for “tweeting an inaccurate report that former President Nelson Mandela had been hospitalised,” the BBC reported.  The Times is owned by Avusa media company.

The Times tweeted, according to the BBC:

“Former president Nelson Mandela is in hospital, according to reports. Watch this space for more information.

“Mandela is not in hospital. We apologise for following up an incorrect lead.”

The BBC reported that the newspaper deleted the first tweet “after the BBC called the Times’ offices.”

According to the BBC, the newspaper’s tweet was “sourced” to the twitter account of radio host Bob Mabena (@bob959), who tweeted “Breaking news – Nelson Mandela is in hospital” Dec. 30 at 1:35 AM EST.  Mabena tweeted several apologies for sending bad news.  According to tweets, he got the bad news from “reruns” of a program from earlier this year.

The Times also published a Dec. 30 report  in which the newspaper noted that Mandela is “in good health.” The Times, however, didn’t note in its article that it helped spread the rumors. The Times wrote:

“After a flurry of rumours — apparently triggered by a TV news station’s review of 2011 stories — that Nelson Mandela was not well, the presidency on Friday moved to quell any fears about the nation’s favourite elder statesman.”

“Only what may reasonably be true, having regard to the sources of the news, may be presented as fact, and such facts shall be published fairly with due regard to context and importance. Where a report is not based on facts or is founded on opinions, allegation, rumour or supposition, it shall be presented in such manner as to indicate this clearly.”

We have written to the Times asking more about this incident and what, if any, social media policies the newspaper subscribes to. We will update with any response.  We have also written to Avusa and Avusa’s public editor, Joe Latakgomo.

We wrote in October when the Financial Mail, a South African newspaper also owned by Avusa, apologized for plagiarism.