'Too many gosh darn foreigners' ('Asians') on LPGA Tour, Radio Host Fired a 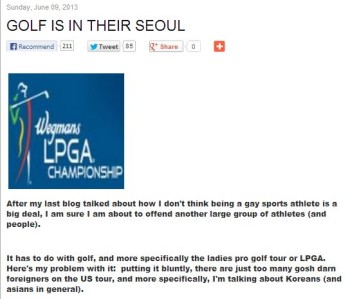 While the post was unpublished from the station’s website, iMediaEthics found it through Google Cache.  The June 9 post, titled “Golf is in their Seoul,” complained about the number of Asians on the Ladies Professional Golf Association (LPGA) tour.

“There are too many gosh darn foreigners on the US tour and more specifically, I’m talking about Koreans (and Asians in general),” Schaller wrote, arguing that one of the problems is that “most of them don’t speak English.”

“I know it is a very ethno-centric viewpoint, but it is hard for us Americans to connect to these players when they can’t communicate with us,” he wrote.  Further, Schaller wrote that “It’s hard to remember specific golfers when half of them seem to have names that sound like the sound you get when you bang pots and pans together.”

On his website, Schaller addressed the controversy and reaction to his post, saying the blog post “changed my life.”  Schaller added that he wrote the blog “on my own” outside of his “job description” but to boost the website’s traffic a little, estimating “maybe 50 people read each week.”

In an email to iMediaEthics, Schaller said his writing wasn’t ever approved by superiors. “I posted all my blogs directly to the station’s website for the two plus years that I wrote them,” Schaller wrote. “No one ever OK’d anything. I honestly don’t think any of my bosses even read any of them until this happened.”

Schaller added that during the June 11 meeting in which he was fired “it was basically explained to me that my blog was very offensive and has stirred up a national controversy, and that they can’t be associated with it or me, and ‘that is why we have to let you go.'”

In his website post, Schaller defended his argument about what he sees as too many “Asian golfers on the LPGA tour,” but acknowledged it was “crass” and “classless” to mock the names of Asians. He claimed:

” When I wrote the column about the Asian golfers on the LPGA tour, and how their overabundance was hurting the tour, I thought it was a valid point.  It had nothing to do with racism against Asian golfers.  Folks, I swear to you and to God that it didn’t.  I said in my column that it might SOUND that way, but I can tell you it wasn’t MEANT that way.”

Schaller did admit that he could have re-framed his argument to be less controversial. “What I should have done, was write a column saying that there are just not enough American golfers doing well on the LPGA tour and it is hurting the popularity of the tour in the US,” he suggested.

Schaller also tweeted many times about his June 11 firing, apologizing . In one tweet, he wrote:

I am sorry to asian and korean people, but if you are not in that group and you are offended by what I said, you need to get out more.

Schaller apologized again in an email to iMediaEthics for “the totally wrong angle on the story” of focusing on what he saw as a high number of Asian golfers instead of a low number of U.S. golfers. But, Schaller called out the “‘political correctness’ in our society,” which he indicated is responsible for the controversy. “I never made any ethnic slurs or denigrated a people or culture….I tried to make a point, made a bad attempt at Archie Bunker-type humor and now I am paying the price. Overall though, I think people need to learn to lighten up a bit.”

When iMediaEthics went to WHAM’s website June 17, we received Page Not Found messages for many of Schaller’s blogposts. We’ve written to WHAM to ask if the station deleted all of his writing.