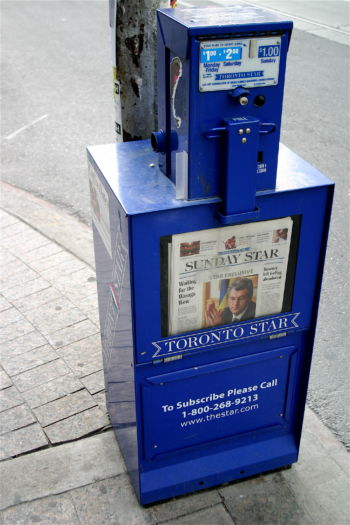 It was in the public interest and “most certainly justified” for the Toronto Star to go undercover at Toronto industrial bakery Fiera Foods, Star public editor Kathy English concluded.

Toronto Star reporter Sara Mojtehedzadeh went undercover for a month as a temporary employee at Fiera Foods in order to report on what it is like for temp workers at the company. Why? Last year, a worker there, Amina Diaby, died after her hijab was caught in a machine, which led to a $300,000 Occupational Health and Safety Act fine. She was the third temp employee to die at “Fiera’s affiliated companies since 1999,” Mojtehedzadeh wrote, and the company “has been slapped with 191 orders for health and safety violations over the past two decades.”

Star editor Michael Cooke and managing editor Irene Gentle “concluded there was indeed no other way to get this information, and most important, that this was a story of strong public interest,” she wrote.

Mojtehedzadeh told English that after researching temp agencies and employment, going undercover “was the only way to get this story” because the Star couldn’t risk “precarious temp workers” getting fired for talking to the newspaper.

In her report for the Star, Mojtehedzadeh explained that growing numbers of Canadians are working in temp agencies, making them statistically “more likely to get hurt on the job.” She wrote, “I am undercover to investigate why.” The result? The Star‘s Sept. 8 report “Undercover in Temp Nation,” co-bylined by Mojtehedzadeh and Brendan Kennedy.

Mojtehedzadeh disclosed in her story that she couldn’t apply for the temp job at the factory using her real name so she used her grandmother’s last name, Heshmati. “I can’t apply as a journalist who has written extensively about temp agencies, so I give Magnus my grandmother’s last name and put myself on a wait list for work,” Mojtehedzadeh wrote. “The agency asks me if I have safety shoes and about my immigration status. They do not ask if I have any experience working in a factory around machinery.” Mojtehedzadeh said she earned $1,552 during her time working at the plant and the Star donated the money to North York Harvest Food Bank.

From her time undercover, Mojtehedzadeh said she only received “about five minutes of training.,” she saw dirty bathrooms and a lack of gloves, as well as sick employees, among other problems.

In one, dated Aug. 30, 2017, Fiera Foods called for the Star to provide its editorial guidelines and more information showing editorial approval of Mojtehedzadeh’s going undercover. “You made no attempt to obtain any information from Fiera before going ‘undercover,'” Fiera Foods’s General Counsel & HR Manager David Gelbloom wrote, calling the reporting “underhanded, not undercover.” Star editor Michael Cooke told iMediaEthics “we did not confront Fiera ahead of time. We thought that would mess up Sara’s ability to go undercover.”

Fiera Foods’ Gelbloom also suggested that the Star committed a crime by using an inaccurate name to get a job and also said Mojtehedzadeh should have complained during orientation if she didn’t think she got proper training. Further, he called for the Star to provide copies of its interviews, photos and recordings from Mojtehedzadeh’s time undercover at Fiera Foods’ plant, and called her biased.