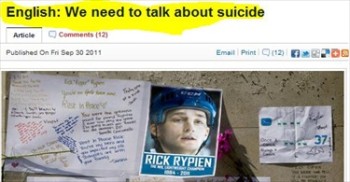 Public editor Kathy English questioned why the Toronto Star and other news media shies away from reporting on suicides in her Sept. 30 column.

English noted that “Suicide is the 10th leading cause of death in Canada.”  As she wrote, in August, NHL player Rick Rypien’s August death somewhat sparked her decision. The New York Times wrote in late August specifically about Rypien’s death and the privacy elements surrounding his death here.  “For some, the imprecision and circumspection around Rypien’s death is not surprising given the tradition of reporting on suicide in Canada,” according to the Times.

According to English, the newspaper’s policy advises its journalists “not to reveal that someone committed suicide unless there is some overriding public interest in doing so.”

English’s comments echoed those made by journalists internationally, as StinkyJournalism has written.

iMediaEthics has taken up the issue of how to ethically and carefully report on suicides several times before. In September 2010, we cited the advice of journalism ethicist Stephen J.A. Ward who had previously questioned if journalists exploit suicides. Ward also suggested journalists discuss how to report on suicides, noting that journalists should strive to “minimize harm.”

We wrote in March 2011 when a New Zealand group recommended revising New Zealand’s guidelines for reporting on suicides.  New Zealand has one of the highest rates of youth suicides and much of the media’s restrictions on reporting comes from the coroner’s office, who is prohibited from disclosing many details of suicides including names and ages.

New Zealand group CASPER, which represents the families of suicide victims, called for the revisions and for careful, informative reporting on both suicide and suicide prevention.

In August 2011, Australia’s press council released new guidelines for reporting on suicides, as we wrote, noting that such reporting “can be of substantial public benefit.”