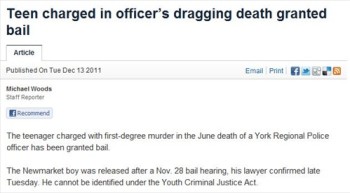 Readers who took Kathy English's survey on editorial decisions were split on whether to publish the dying words of police officer Garrett Styles. The Star reported earlier this month that a teen charged in the officer's murder was granted bail. (Credit: TheStar.com, screenshot)

English asked readers to weigh in on some controversial editorial decisions the newspaper made in 2011 in a 16-question Yes or No survey earlier this month.

For example, readers were asked if they would publish a photo of kittens “following surgery to sew their right eyelids shut” after being found with “their right eyes poked out.”  Other editorial decisions readers are asked to make include whether a reporter should go undercover to check out “allegations of high school ‘credit mills’ where fees are paid for credits given for little work.”

English revealed the results of her survey in a Dec. 23 story here.

According to English, “almost 700 readers” completed the survey.  Survey takers told English that 82% would publish the kitten photo and 94% would OK undercover reporting in the high school “credit mill” case.  English added what an editor’s perspective would be in those cases:  that while the kitten story may be an “inhumane” situation, “we shouldn’t shield readers from images of cruel reality,” and that going undercover would be warranted since it would be “in the public interest.”

Other scenarios split readers’ opinions.  For example, readers were asked if they would unpublish a story about a man accused of “sexual assault of a preteen girl” after the charges are dropped.  In that case, English reported that 52% of readers would agree to unpublish, but the newspaper’s policy doesn’t permit unpublishing.  She added that “the online report of the charges must be updated to report that the charges were dropped.”

Divisive issues included identifying a novelist as a grandmother — 50% said yes, English’s thoughts: “Would we label an accomplished man as a grandpa first? So why label this author as a granny?” — and publishing the transcript of a dying police officer’s last words — 48% said yes, English explained this is a matter of public interest.  We wrote in October when the Ontario Press Council likewise ruled that it was in the public interest for the Canadian Press, the Toronto Star and the Globe and Mail to publish his dying words. Read that story here.