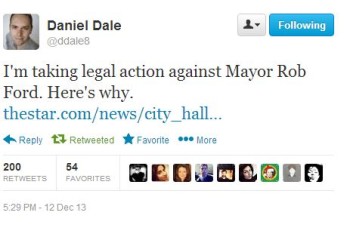 Toronto Star city hall reporter Daniel Dale is suing Toronto Mayor Rob Ford for suggesting that he was a pedophile.

Dale said yesterday he was considering suing after comments made by Ford in an interview with TV host Conrad Black that last year Dale was “taking pictures of little kids,” suggesting, but not outright saying, pedophilia. Ford said:

“The worst one was Daniel Dale in my backyard taking pictures. I have little kids. When a guy’s taking pictures of little kids, I don’t want to say the word, but you start thinking, you know, what’s this guy all about?”

#robford reporter Daniel Dale will sue over the pervert accusation with the Toronto Star’s full and complete support. Stand by.

Dale confirmed on Twitter that he is “taking legal action.” He linked to an article he wrote for the Star that he is “serving Rob Ford today with a libel notice, the first step in the process of pursuing a defamation lawsuit” and said that the article was his comment on the matter.

I’ll let my article stand for itself, and I won’t be commenting further today. Time to get back to work.
— Daniel Dale (@ddale8) December 12, 2013

In his statement, Dale added that he is also suing Vision TV, which broadcast Ford’s “vile and defamatory remarks to Conrad Black even though their interview was filmed days before it aired.”

His lawsuit calls for Ford “to immediately retract the false insinuation that I am a pedofile and all of his false statements about my conduct on May 2, 2012.” He also wants a public apology from Ford and Vision TV’s owner.

“If Ford does not do so, we’ll see if he is willing to repeat his lies under penalty of perjury,” Dale wrote, noting  that he was hoping to avoid a high-profile, lengthy lawsuit. “I’m a non-confrontational guy, and I just wanted to write articles and go home,” Dale wrote.

Dale explained he finally decided to sue because Ford continued to repeat his accusations against Dale and his “good name.”

According to Dale, readers have offered to give him money to help fight the accusations in court but the Star “will be covering my costs.” He also said he won’t take a “leave of absence” of reporting on Ford. “I will not let this affect my job,” he wrote. “I will not be bullied off of my beat.”

In a story for the Toronto Star yesterday about Ford’s comments, Dale went point by point (or as he wrote, “lie by lie,”) through Ford’s recent accusations.

Dale denied that he was in Ford’s backyard photographing little kids in the dark. Instead he was “in the adjacent park” around 7:30p.m. (“sunset was about 8:20”) for a story “about Ford’s rare application to buy public land.” He had tried to take one camera phone photo — of “a boring chunk of parkland” — but his phone died and police confirmed there were “no photos whatsoever from the evening of the incident.”

He also accused Ford of threatening him even though he identified himself as a reporter. He wrote:

“The mayor did frighten me, and I did ask him not to hit me — because, as he failed to mention, he ran at me with a raised fist, which he then held less than two metres from my face, and refused to lower that fist until I surrendered my BlackBerry to him. He did so even though he knew who I was, and even though I explained, loudly and clearly and repeatedly, what I was doing there.”

Last year, the Star reported that Ford’s complaints to the police over the incident didn’t result in any charges.  Det. Tricia Johnston told Dale she “closed off the investigation” and he’s “not being charged.” The Star noted at the time that Ford had called Dale a “peeping Tom.”

Despite Ford’s accusations about Dale’s behavior, Dale said he intends to “cover Ford with the non-grudge-bearing professionalism and courtesy I’ve shown him every day since the incident” and that any legal action between him and Ford is separate from the newspaper.

“In fact, if I were a businessman or teacher or anything other than a Toronto Star reporter, I would have served Ford with a libel notice already,” Dale wrote this week. “I’m cautious because I don’t like being or staying the centre of attention, because I like my life the way it is, because it would be tiresome to listen to Ford’s claims of a vendetta, and because it seems like it would probably be unpleasant to find yourself in a long public spat with a wealthy and generally unrepentant person with good lawyers and a big megaphone.”

Globe and Mail public editor Sylvia Stead blogged recommending Dale sue Ford.  Stead, who noted in the past two decades “working with this newspaper’s legal counsel” she usually advises reporters to toughen up against criticism of their work and respond to to attacks via letters or Twitter. But those critiques on reporters usually attack way of working whereas in this case, Ford went “too far.”

“It is quite another to have someone suggest a reprehensible personal slur,” she wrote.

UPDATE: 12/12/2013 5:56 PM EST: iMediaEthics has reached out to Vision TV and Mayor Rob Ford’s office for comment and will update with any response.