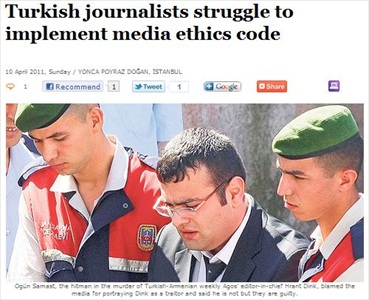 Turkish journalists are still trying to activate the ethics code they created at a media ethics workshop this past year, the Turkish newspaper Today’s Zaman reported.

As iMediaEthics has reported, the International Center for Journalists joined with Turkish media group Medya Dernegi to host a media ethics workshop and educational training seminar.  At the seminar, a group of 25 Turkish journalists created an ethics code to serve as a guide for media in the country.

But, this week’s story from Today’s Zaman’s Yonca Poyraz Dogan, who participated in the ICFJ/Medya Dernegi workshop, reported that the journalism ethics code still hasn’t been activated and that a new group called Media Ethics Platform has been created to host a website featuring media ethics case studies and news.

“We think that the media is in ethical crisis,” Baris Soydan, a journalist from Sabah Daily and a project coordinator for the workshop,  is quoted as saying. “We would like to raise our voice to keep the issue on the agenda of the journalism profession.”

StinkyJournalism wrote to Dogan for more information about Media Ethics Platform. Dogan explained that she and Soydan started the website after the workshop as a way to work together to promote journalism ethics.  The project is “truly grassroots,” Dogan wrote.

Another example of questionable media ethics came from comments made by Ogun Samast, who is accused of the 2007 murder of weekly Agos newspaper editor-in-chief, Hrant Dink.

Samast, who has reportedly confessed to killing Dink, reportedly claims that he’s not guilty, because the media drove him to commit his act. His comments were made in a letter to the court where he is being tried.  According to Today’s Zaman, “some Turkish newspapers” claimed prior to Dink’s assassination that Dink “betrayed Turkey” in some of his columns.

“I am not guilty. The ones who are guilty are [those responsible for] the newspaper headlines that portrayed Hrant Dink as a traitor. I dealt with what was bothering me. Now let the people who prepared those headlines think [about it]. Where are the people who brought me to this point? I did not know about Agos. My head was filled with ignorance then. I learned about Dink from newspaper headlines.”

Deutsche-Welle reported that two investigative journalists were arrested and accused of being part of a terrorist group, when the journalists state that “they were actually investigating plots to undermine the government.”  And, daily newspaper Radikal has been raided by “officials,” according to Deutsche-Welle.  The raid was reportedly to uncover an unpublished book called “The Imam’s Army.”

A recent study from the Organization for Security and Cooperation in Europe (OSCE) stated that 57 journalists are currently in Turkish prisons, more than any other country.  According to the report:

Read more about that report here on OSCE’s website.