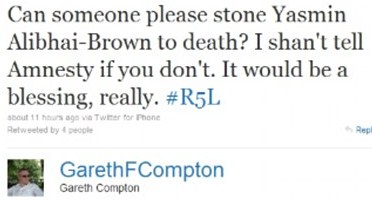 British politician Gareth Compton was arrested because of his tweet asking for someone to "stone" journalist Yasmin Alibhai-Brown (see above). (Credit: The Daily Mail, Twitter)

In the U.K. this week, a politician was arrested, a cricket player has been sued for libel, and an ordinary citizen has become a trendy topic among the tweets–all British legal actions resulting from their short messages on Twitter.

The Telegraph’s Milo Yiannopoulos argued that “the law must learn to keep up with technology,” though at least two of the offending tweeters have claimed they were tweeting in jest, not in earnest.

The Politician & the Journalist

The politician, Gareth Compton, tweeted that journalist Yasmin Alibhai-Brown should be stoned.  While he claims his tweet was a joke, he has since “been arrested and bailed, suspended from his party, accused of ‘incitement to murder’ and branded a racist,” The Daily Mail reports.

Compton is a conservative Birmingham City Councilor.  Alibhai-Brown is a columnist for British newspaper the Independent.

According to the Daily Mail, “a member of the public” alerted the police to his tweet, which reportedly “violated section 127 (1a) of  Communications Act 2003.”

That section reads that “a person is guilty of an offence if he— a) sends by means of a public electronic communications network a message or other matter that is grossly offensive or of an indecent, obscene or menacing character.”

SiFy.com reported that Alibhai-Brown said her daughter found the post and was concerned:

“Before she went to bed, my teenage daughter was unusually distressed. She said she didn’t want me to be a journalist anymore and was worried that if I went to the door to answer it somebody would shoot me,” she is quoted as saying.  “Later we found out, so initially I was incredibly upset by it. It was a rational discussion I was having on the radio, not at all an angry discussion.

“I straight away decided this was incitement and I would go to the police, but as it happened I didn’t have to as a member of the public had already done that. A politician validates the many people who do threaten columnists like me… what you’re saying is ‘it’s okay to hate so much that you kill a journalist and a writer’,” she added.

In a Nov. 12 column, Alibhai-Brown wrote that Compton’s tweet “validated the haters who think it is OK to threaten” her.  Because Compton wrote “stoned” instead of “shot,” she wrote that the post was “incitement” given her Muslim faith.

Indian cricket player Lalit Modi was sued for his tweet claiming New Zealand cricket player Chris Cairns fixed matches in the Indian Cricket League.  According to the Guardian, Modi attempted to deflect a lawsuit by claiming “no one in England had actually read” the message.

However, a libel judge decided that Modi could in fact be sued for defamation over his tweet.

Paul Chambers is “the first person convicted for a tweet,” the Guardian wrote.  His conviction was for “sending a menacing message via a public telecommunications network,” a clause in the Communications Act 2003.  However, the Guardian questioned if his tweet was what was “in mind” when the code was created.

The Financial Times reported  that Chambers “was fined £1,000 in May” for the tweet about the UK airport Robin Hood Airport.

His offending tweet was:  “Robin Hood Airport is closed. You’ve got a week and a bit to get (it) together, otherwise I’m blowing the airport sky high!!”  An airport manager spotted the tweet several days later on Jan. 11, sent it to a manager who sent it to the police.

The British freedom of expression group Index on Censorship spoke out against the case, Canadian Press reported.

“Police and prosecutors ‘seem to have completely ignored the notion of context, which is a very dangerous thing,’ said Padraig Reidy of the London-based Index on Censorship. ‘If he genuinely intended to blow up the airport he wouldn’t have tweeted it. It’s obviously a joke,'” Canadian Press noted.

In a show of support, “thousands” have re-tweeted Chamber’s post Nov. 12 with the hash tag “IAmSpartacus.” The tag was one of the most popular trending topics yesterday.

However, Canadian Press noted that “South Yorkshire Police, which was responsible for Chambers’ original arrest, refused to say whether it was taking moves to arrest the thousands of people now threatening to blow up the airport.”