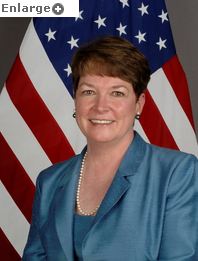 Heather Hodges was appointed U.S. ambassador to Ecuador in 2008. She was recently asked to leave the country. (Credit: US State Dept)

Comments made in diplomatic cables leaked through WikiLeaks have led to a U.S. ambassador’s dismissal from Ecuador. In April, the Ecuadorian government told Heather Hodges,  the U.S. ambassador to “leave as soon as possible,” CNN reported.

According to a state-run news agency, “the decision was based on a State Department cable made public by WikiLeaks.”  The Ecuadorian foreign minister, Ricardo Patino, confirmed Hodges was “being kicked out of the country,” but didn’t describe it as “expulsion.”

Patino also explained that kicking Hodges out isn’t “against” the U.S. government, but Hodges the individual, “a diplomat who made serious statements.”

The cable that got Hodges in trouble reportedly stated that the president of Ecuador, Rafael Correa “was aware of acts of corruption by the police high command.”

Among the journal’s “WikiLosers” are U.S. ambassador to Mexico Carlos Pascual, who has resigned; Bradley Manning — dubbed “the first loser,” and “the biggest by far”; and Helmut Metzner, the former chief of staff for the German foreign minister and the “first diplomatic official to get the ax over a WikiLeaks cable.”

Meanwhile, a court set July 12 as the date for Julian Assange’s appeal of his extradition to Sweden.

In a Q & A with Radio Free Europe Radio Liberty, WikiLeaks spokesperson Kristinn Hrafnsson defended the anonymity of some WikiLeaks workers “in light of the threats and the attacks that the organization has been under.”  Hrafnsson added that “there are many dozens” of media organizations working with WikiLeaks currently.

He further questioned any “need for rebuttal” by the subjects of leaked documents, because ‘the material speaks out for itself. It is authentic, and nobody has claimed that it’s not.”  Hrafnsson commented that there isn’t any “hacking involved in WikiLeaks, no proactive work in getting information.”

WikiLeaks serves as “passive recipients of information.”  And when it comes to “Anonymous,” the hacking group credited with taking down the websites of WikiLeaks critics, Hrafnsson said WikiLeaks has “no connection” or “relationship” with the group.