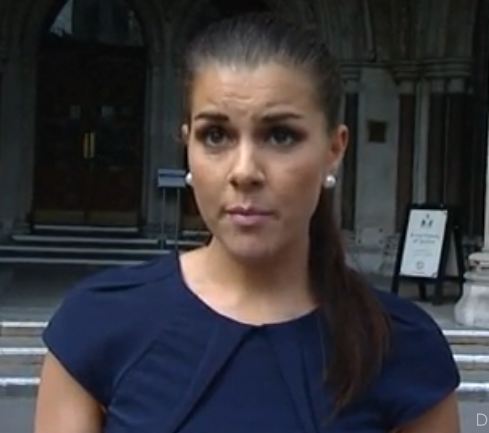 Imogen Thomas, pictured above, gave a statement explaining she can't defend herself against charges of blackmail and an affair because of an injunction. (Credit: Daily Motion, screenshot)

Interestingly, Thomas was on the newspaper’s side arguing for the court to let the Sun name the soccer player in question.

The court’s judge, Justice Eady, wrote this week that the Sun couldn’t identify the player because there wasn’t any “legitimate public interest’ and because the story would violated privacy, according to Journalism.co.uk. Eady granted a temporary injunction over this story last month.

Thomas reportedly didn’t want stories on the alleged relationship published either, but she “didn’t have £50,000 to get an injunction” so she was unable to stop her name being published.  The Sun published a story about the alleged affair April 14 naming Thomas but noting that the “Premier League star” got a legal order preventing the newspaper from identifying him.

She backed the newspaper’s attempt because she has stated she has “been thrown to the lions” in having her name, but not his, outed by the media.

The Sun reported that Thomas has also been accused by the soccer player of blackmailing him for £50,000 and then  £100,000 to “stop her going public about the six-month fling.”

Thomas denied the accusations and criticized the injunction process, the Sun reported.

“Yet again, my name and reputation are being trashed while the man I had a relationship with is able to hide.  What’s more, I can’t even defend myself because I’ve been gagged – where’s the fairness in this?

“What about my reputation? If this is the way privacy injunctions are supposed to work there’s something seriously wrong with the law. I’m even accused of trying to blackmail this man – that’s outrageous. Nothing could be further from the truth.”

The Guardian noted that the judge didn’t rule on if any blackmail occurred.

UK reports like the Daily Star’s noted that the soccer player’s name has been outed, but still couldn’t name the person. See for example:

“Peru’s daily La Republica also printed an article under the headline: ‘In the UK they’re casting doubt over the faithfulness of [player’s name].’