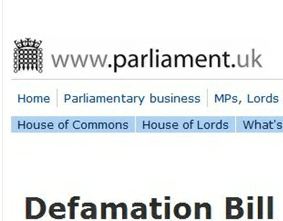 See above a screenshot from the current UK bill on libel. (Credit: Parliament, screenshot)

The UK government announced a call to require online sites to provide the identity of anonymous commenters writing information accused of libel, the BBC reported.  The UK has been known as a libel tourism destination for plaintiffs, as we have written, because the burden of proof is on the defendant.

According to the BBC, the requirement is “to be added to the Defamation Bill.”  The UK Justice Secretary Kenneth Clarke, who published the bill, explained:

“Website operators are in principle liable as publishers for everything that appears on their sites, even though the content is often determined by users…

“Our proposed approach will mean that website operators have a defence against libel as long as they identify the authors of allegedly defamatory material when requested to do so by a complainant.”

The Telegraph noted that the proposal also will create a “one-year time limit” — essentially serving as a statute of limitations on lawsuits over allegedly libelous comments.

Currently, people trying to sue over potentially libelous anonymous commenters have to first get “a court order to force the website owner to hand over subscriber contact details,” but the proposal would call for websites to be “intermediaries,  trying to resolve the dispute between author and complainant,” before a court order could get the commenters’ identity for a libel lawsuit, Reuters explained.

We wrote in May about the proposed libel reform bill. The bill, which was mentioned by Queen Elizabeth II in a May 9 Parliament speech, suggests many reforms to UK libel law including new “statutory defenses of truth and honest opinion” and public interest defenses.  Also, the libel bill offers rules on jurisdiction, calling for libel lawsuits to either be against people “in the UK or a European Union member state” or if the UK is the right place to sue.

We have written to Clarke for further comment and will update with any response.