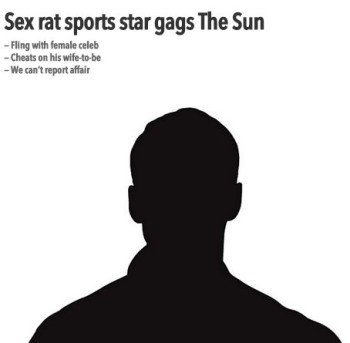 The Sun reported that it was gagged from IDing a sports star. (Credit: Sun)

The UK Sun wants to publish a story about a “prominent and successful” athlete and his affair with a celebrity before his marriage, but a UK court granted the athlete an injunction that prevents the newspaper from naming him or his wife in the story, the Guardian reported.

The Sun‘s story was based on an interview with the celebrity, according to the Guardian. The groom, however, should not feel completely relieved, because the injunction only will last a “short period.”

Instead of naming the people involved, the court rulings refer to the athlete as “A1,” his wife as “@A2” and the celebrity with whom A1 had a relationship with as “X.” The athlete wasn’t married yet but dating his now-wife.

The judge suggested the story the Sun wants to run isn’t in the public interest.

“A1’s conduct in two-timing A2 for a relatively brief period before they married must have hurt the two women concerned when they found out about it,” the judge Justice Laing said. “It is not for me to moralise about such conduct. But I do express a suitably diffident doubt whether this conduct was socially harmful.”

The judge added, “It caused private pain; but no one was corrupted or coerced. The conduct had no ramifications beyond the three people who were affected by it. It did not affect society in any way.”

The Sun did publish its story a front-page report about the injunction. The story was titled “Sex Rat Sports Star Gags The Sun,” according to the Press Gazette.

“A top sportsman has gagged The Sun to stop us revealing how he cheated on his wife-to-be with a female celebrity,” the Sun wrote. “He got a High Court injunction banning us from identifying him or his lover, who wants to expose his ‘hypocrisy’.”

The newspaper went on:

“In the interview the lover intended to speak out to expose what she claims is the sportsman’s hypocrisy.

“She also wanted to tell how she believed he had broken rules by meeting her in hotels for sex, duping both his girlfriend and his team manager.

“But an injunction stopping The Sun publishing the lover’s account was granted by the judge after an application by lawyers representing both the sportsman and his wife.”