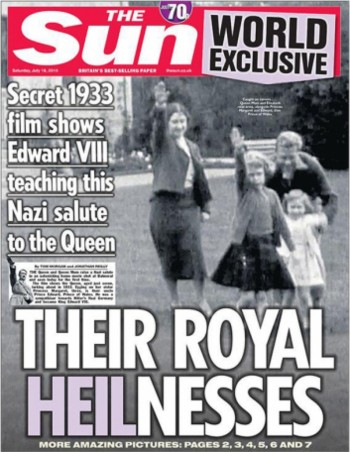 The Sun front page, "Their Royal Heilnesses." (Credit: The Sun via Daily Beast)

In response to the publication, Buckingham Palace said, according to CNN:

“It is disappointing that film, shot eight decades ago and apparently from (Her Majesty’s) personal family archive, has been obtained and exploited in this manner.”

The Sun’s managing editor Stig Abell told iMediaEthics today that the Sun has not heard from Buckingham Palace about the story.

The Sun article, “Their Royal Heilnesses: Secret 1933 film shows Edward VIII teaching this Nazi salute to the Queen,” is touted as a “world exclusive.”

The story and the images are based on a royal family’s “home movie,” the Sun states. “The astonishing clip lay hidden for eight decades,” the Sun wrote. “The grainy home movie is thought to have been shot in 1933 or 1934, as Hitler rose to supreme power in Germany.”

The Sun got the video from an anonymous source, it stated.

“The original film remains under lock and key. But copies of the clip were made several years ago and one has now been handed to The Sun by a source who believes it to be of massive public interest and historical importance.”

In an interview with BBC Radio 4’s Today, the Daily Mail noted, Sun managing editor Abell argued the video came to the paper “in a legitimate fashion” and wasn’t meant to criticize the Royal Family but rather was a story in the public interest.

iMediaEthics asked the Sun’s Abell if the Sun knows how the source got a copy of the tape. He responded, “We’re not discussing the source.”

The Sun’s article goes on:

“The 20-second cine film reveals Edward, who once gave a Nazi salute to Hitler and claimed he was ‘not a bad chap’, larking around with his sister-in-law the Queen Mother and her young children in the grounds of Balmoral.

The Sun included its argument for publication claiming “Experts last night hailed the footage as an incredible new historical document of huge public interest,” while noting that “there is clearly no suggestion that the Queen or Queen Mother were ever Nazi sympathizers” and that Queen Elizabeth as a 7-year-old “would have had no inkling of the implications of making a Nazi salute.”

The Sun also published a separate article defending its publication,titling the post “The images we had to publish.”

In that article, the Sun acknowledged that both “Elizabeth and Margaret are kids” in the video and that the footage was made before anyone knew “what Adolf Hitler was capable of.”

“What gives The Sun’s extraordinary images such historical significance, and the reason we believe the public has a right finally to see them, is the involvement of the Queen’s uncle Edward,” the Sun argued.

“These images have lain hidden for 82 years. We publish them today, knowing they do not reflect badly on our Queen, her late sister or mother in any way,” the Sun added. “They do, however, provide a fascinating insight into the warped prejudices of Edward VIII and his friends in that bleak, paranoid, tumultuous decade.”

The Sun called for the release of “the rest of the Royal archive from that period, of similarly immense interest to historians and the public.”